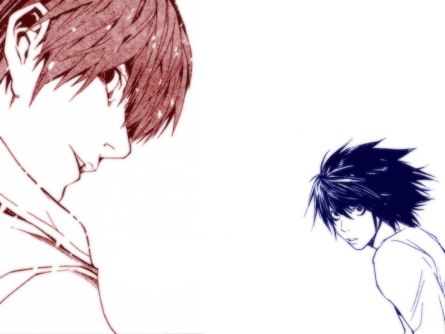 On the second day of Christmas, my true love sent to me
Two Heroes Dueling
And a Bloodstained Euphie.

I didn’t actually finish Death Note. What I enjoyed (in company with many, I think) was the vast and extremely complex contest of deduction between L and Kira/Light. (Did anyone ever manage to decide whether or not L was moe?) When this contest finished, the show was bound to sag; unfortunately the next arc didn’t hook me in quite as quickly as it needed to to maintain my interest. But it’s easy to criticise.

And in criticising I would forget the primal brilliance of that battle of minds. Provided you didn’t try to pick it apart, but just let the story carry you along, it had the subtle, swift movements of a physical contest, like boxing or fencing. Epitomised by L’s TV broadcasts in the early episodes. Massive credit is due to ‘Ohba Tsugumi‘, or whoever owns the pen-name (if it is a pen-name), for coming up with the concept.

Storytelling loves dualities, going back at least as far as Gilgamesh and Enkidu, and it’s easy to track the attraction of contrast, not just in narrative (consider Zoroastrianism or the proliferation of the iamb). Perhaps because of this near-ubiquity, it’s hard to get a contest of heroes to be really gripping, but Death Note managed it.

That last paragraph sounds pretty pompous to my ear, but such is life.

This entry was posted in commentary, fanboy and tagged death note, twelve days of christmas 07. Bookmark the permalink.