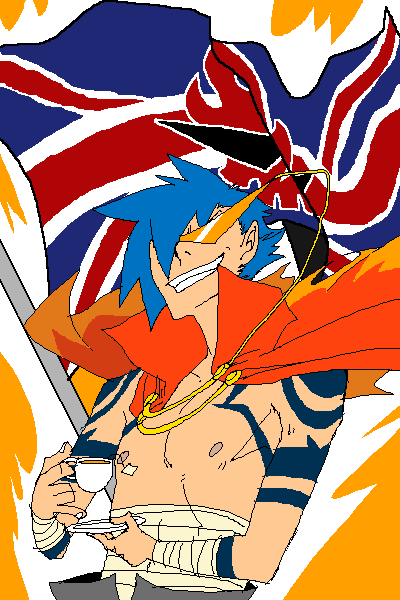 ‘Twere the Welsh wot started it. More accurately, one Member of Parliament who proposed the alteration of the Union Jack to reflect ‘Wales’ . . . true place in the Union’. The rest, as they say, is history [separate links]. A beautiful example of something spiraling out of control across the internet. I particularly love the Telegraph’s blank incomprehension, and the culture clash on its comments pages between its usual conservative clientele and meme-spouting anime fans. A thing of beauty.

Now, I may have the mind of a Marxist, but I have the soul of a reactionary and naturally take a certain interest in my country’s flag. Even if this happening is really too recent to reminisce about, I just know that I’ll look back with a smile on this by this time next year. It’s also a fine illustration of the current quality of the Daily Telegraph, which (in case you haven’t been closely following the British media recently (if not, why not?)) has been going rapidly downhill.

Nowadays, the old England-first situation is (somewhat) reversed, as England is the only part of the Union without an intermediary layer of government between Westminster and the Local Authorities (Scotland has a Parliament, Wales has an Assembly, and Northern Ireland has an Argument); this leads to some interesting constitutional tangles. Until we’re all subsumed into the A.E.U., anyway. At least we don’t suffer controversies about the too-rampant masculinity of a military crest.

I will leave you with the thought that, bizarrely, Wales actually receives more representation on the Britannian flag than on the Union Jack, as the yellow stripes fit the Flag of Saint David.

This entry was posted in fanboy and tagged tengen toppa gurren lagann, twelve days of christmas 07. Bookmark the permalink.