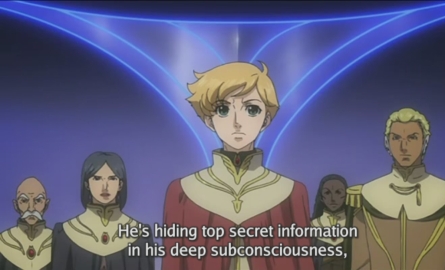 Strangely, no-one in this scene suggests waterboarding
[The Animanachronism: tuned in to recent political controversies in foreign lands.]

I’m tempted to dub Toward the Terra as ‘The Series that Leap’t Thro’ Time’. Shifts in time are nothing unusual, but Terra does them regularly and always in the same direction, gradually adding to its cast and its setting all the while.

The first time this happened caught me by surprise (I noted on the sixth day how pleasurable surprise can be). I wasn’t expecting the hero of the series to be provided with superpowers and a cool cloak quite so early on. But I should really have noticed that this story is the journey of a people (the Mu), not of a hero. Jomy’s travails can be left in part to the viewer’s imagination, because the show’s about a search for a promised land, and hatred (yes, a one word theme), not the standard ‘hero maturing’ business.

Oh and there’s the whole ‘man raised as a machine’ thing too. And the gradual world-building process. And the Hellenic nomenclature (‘Ataraxia’, ‘Physis’ and so forth) and aesthetic, featuring lyres, vine leaves and neo-classical columns . . . Though it has certain flaws (a weak first arc and the way the CGI is a bit in-your-face, for example), Toward the Terra is good. Don’t just take my word for it: bateszi has [contains some spoilers] something to say on the subject as well.

This entry was posted in commentary, fanboy and tagged terra e . . ., Toward the Terra, twelve days of christmas 07. Bookmark the permalink.