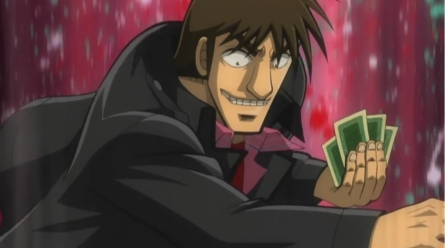 I was (quite recently) persuaded that Kaiji was worth my while. One swift catch-up later, and it’s managed to make it into my twelve days. Maybe this is the effect of proximity – something so recent is bound to be prominent in the memory – but I’m convinced that Kaiji makes it onto this list on merit alone.

Kaiji is a debtor who finds himself (in the initial arc) trapped in a kind of survivalist gambling hell, a four-hour long, twisted version of Rock-Paper-Scissors played by dropout debtors. Lives are at stake (or as good as), and the rules are brutally simple, but beyond the rules given to the players lies a hidden layer of loopholes and manipulations. Beyond that, there’re mind-games aplenty. And outright cheating, of course.

Kaiji is not blessed with a gift for gambling, or indeed with very good luck. But he does harbour a resolve every bit as remarkable as that found in Tengen Toppa Gurren Lagann, if less ostentatious. Concretebadger has pointed out that it’s a show in which the manly resolve to pick oneself up and keep on going is extolled, hence my coinage of ‘garmbling’. (It’s also a very homosocial show.)

The price of failure: a loser is taken away

Kaiji might be about resolve, or capitalism, or trust, or moral responsibility, or moral courage, or being trapped. There’s a strong dash of reality TV in its makeup too: the narrator may be annoying at first, but he serves to implicate the viewer in the action like a reality show’s narrator does. We’re watching Kaiji’s struggles for entertainment – does that put us on the same level as the rich gamblers we see in Episode Eleven? But what I find most memorable is actually Kaiji‘s use of scene.

The room where Restricted Rock-Paper-Scissors is played has a glittery casino decor. Gold and red are the striking colours. These opulent surroundings are a fine contrast to the tension, tearfulness and treachery we see in the ga(r)mblers themselves.

In the centre of the room a large fountain rises up, topped by a headless statue of (what seems to be) winged Nike (make of this what you will). Stairs lead up to a bar to which debtors who survive the game ascend, while there’s a door to the mysterious ‘next room’ where losers are taken; the debtors swiftly begin to refer to the upper floor as ‘heaven’ and the next room as ‘hell’.

For eight episodes, Kaiji relies mainly on this room, relieved by visual metaphors. It’s remarkable that we don’t swiftly tire of this, but there’s just enough elements to the setting to take on extra meaning (such as the heaven / hell division) without impinging on us and reminding us that we’ve only seen one room for several episodes. Really rather impressive.