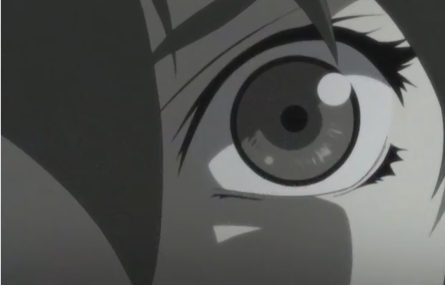 Sometimes I like to pay (ridiculously) close attention to short stretches of animation, an activity I call, half in jest, ‘close reading’. This is one of those times.

This particular slice of animation is the second fight scene from the third episode of Seirei no Moribito (also known as Guardian of the Sacred Spirit), though I’ve attempted to ensure that this will be of some interest regardless of whether you’ve seen the show or not: the entry is lavishly illustrated and contains no major spoilers. It just so happens that this is, in my opinion, one of the greatest pieces of animated action ever to have crossed my laptop’s screen, for reasons which will hopefully become clear shortly.

A little context: an incapacitated boy, Chagum, is about to be dispatched by Jin, an assassin. The whole scene takes place in what looks to me like a partially dried-up riverbed, during rain.

There are actually nine ‘shots’ (though this being animated, there’s no camera) that make up these eleven seconds of action:

A very brief image of the undergrowth; the heroine of the show, Balsa, bursts out of it at great speed. Note that we only catch a very brief glimpse of her here, and it’s only her legs which are ‘in camera’. Of course, we can easily guess that it’s her, because we, the audience, have been dying for her to turn up and save Chagum from his imminent death for the last minute.

A brief ‘reaction shot’ – Jin turns, shock on his face. Just previously we’ve seen a flashback, revealing the fact that he actually feels affection for Chagum himself. I think there is a certain amount of viewer sympathy for him at this point, especially since we’ve an intimation that he’s about to get EdgarAllenPwned. 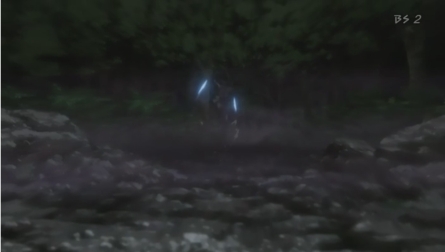 Jin’s-eye-view of Balsa – she’s a vague blur. Two shining shapes rush towards us, almost coming out of the screen, but before we can figure out what they are . . .

Jin has deflected the throwing knives. They are actually drawn here, but this happens so fast that you don’t see them properly unless you pause the action. The impacts throw up sparks. Note that this is the same ‘point of view’ as shot 2, although a little more zoomed out – so far, we’ve really had the camera following Jin’s experience; as such, shots 1-4 dovetail neatly with Jin’s flashback which preceeded them. 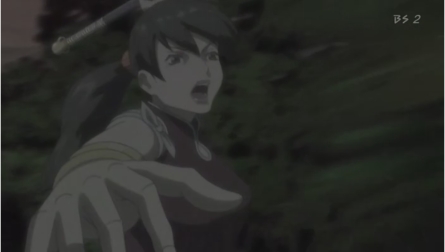 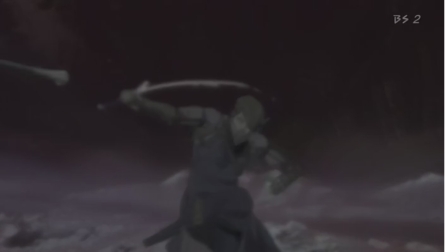 We finally get a proper, though brief, view of Balsa, rather than just her legs or a vague blur – this begins, like shot 3, from Jin’s perspective, but the ‘camera’ zooms in on Balsa’s face as she launches her spear. The spear is missing its head (it was lost earlier in the episode). The camera shifts from following Balsa’s face to tracking the flight of her spear through the air, finally depicting it knocking Jin’s blade out of his hands. Although this shot began with a ‘Jin’s-eye-view’ of Balsa, it ends with a ‘Balsa’s-eye-view’ of Jin. This is the point at which the camera begins to follow Balsa’s experience instead of Jin’s.

Balsa’s foot launching her off the ground, and her hand picking up a large stone. Just long enough for the viewers to grasp what she’s doing.

Balsa lands on top of Jin, simultaneously knocking him out with the stone. She begins to collapse on top of his body, propelled by her momentum. Her loose ponytail flows sinuously down the centre of the screen as the shot finishes, which is a neat contrast to the extremely jerky movement of Jin’s head from near the centre of the images to near the left-hand edge, as she smashes the stone sideways against his skull. The camera is now firmly following Balsa, as everything from the second part of shot 5 onwards has centred on her. 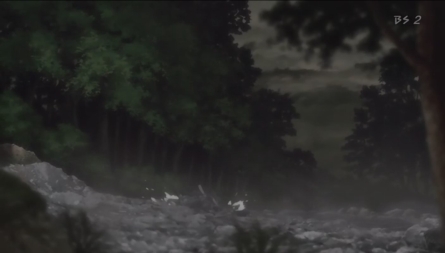 The final moment of collapse. Balsa has previously in the episode sustained a life-threatening gut wound, as well as a wound from a throwing knife. For this shot the ‘camera’ is pulled much further away than it has been at any time previously in the sequence, signalling the end of the very detailed depiction of action, and allowing us a moment’s breathing space to contemplate the immobile bodies. There is a crash of thunder in the background, before Balsa forces herself back up to attend to Chagum.

There are four general points in this sequence’s composition that I would like to highlight, before I move onto why this scene is a particular favourite of mine.

Firstly, there is no music. This series has a rather fine (hardchoral, one might say) musical score, and Kawai Kenji is perfectly capable of summoning up an action tune: the first fight in this episode had an excellent, martial, drum-heavy piece going on in the background. However, this sequence refuses to musically signal its arrival – this would reduce the shock effect of the sequence’s brevity and suddenness – and it is of course too short to properly use a lengthy piece anyway.

The lack of music allows the ear to focus on the actual sounds – the impacts of weapons – and also the sounds that Jin and Balsa make. Jin grunts twice – once with surprise, once as he deflects her knives – but Balsa actually makes five distinct sounds. The third is a ferocious cry of rage, which echoes around the stony riverbed; I love the way this scene uses echoes to give us an aural sense of the space it’s set in. The lack of a musical score not only emphasises the shock of the action’s beginning, but it also emphasises the shock of its end, and the soundscape’s return to the sound of falling rain.

Because of that rain, every impact throws a spray of shaken water drops up into the air. This is very important in giving the fight’s movements their incredible visual force. For a good comparison, see the use of a very similar technique in the final confrontation between Spike and Vincent in the Cowboy Bebop movie.

Note also the interesting progression in Balsa’s weapons. In fact, this is a regression in technological terms. She initially launches two throwing knives – metal, fashioned objects which require a relatively high investment in time to produce – then proceeds to throw her spear shaft, which at this point in the story lacks its head and is thus basically a wooden stick – and finally seizes a stone and delivers the coup de grâce with it. The technological regression in Balsa’s weapons as the sequence goes on strikes me as an external indication of her exerting all her effort (and resources) to protect Chagum.

Another effect of the technological regression is to bring in the (familiar) theme of violence dehumanising its perpetrators. Thankfully Seirei no Moribito doesn’t beat us over the head with this idea, but it does bring it up in a more developed (and brilliant) way later in the series; in this sequence it is brought out by Balsa’s descent from the swift, elegant spearwoman of the episode’s previous fight scene to something very bestial – screaming and smashing someone over the head with a rock.

Finally, this sequence is an example of a very rare thing in anime – the female action heroine in a maternal role. I’ve no real conclusive evidence for this, but I feel that, with her shouts of rage, rapid onslaught and unsubtle brutality as she protects a child, there’s a strong sense of the archetypal ‘tigress protecting her cubs’ in Balsa during this scene. This is really by-the-by, but I feel it’s worth mentioning because such a portrayal is so rare.

Why then is this one of my favourite action sequences in anime?

I think that this scene typifies what I call ‘mature’ violence. Now, by ‘mature’ I don’t necessarily mean that the violence is graphic (though it can be) – after all, there’s actually no blood at all in this scene. What I mean by mature is much simpler – this scene has a grown-up attitude to violence.

This isn’t violence preceded by power-up sequences and peppered with catchphrases (though I do enjoy that kind on occasion too). It erupts suddenly, it’s rapid, brutal and shocking, and it’s over just as suddenly. Furthermore, note that while Balsa does win, it’s costly. She exerts all her strength to save Chagum, despite being wounded, in this onslaught. No one’s left standing when the sequence closes, and I feel that this is an important point.

This type of violence is realistic. Not realistic in specific terms; I doubt very much that it’s possible to block throwing knives using a sword, with an instant’s warning, and nor is it likely in real life that one could throw a spear shaft with the reasonable hope of knocking someone’s blade out of their hands. But it’s realistic in the general, and perhaps more important sense – it’s sudden and shocking, brief and brutal and it takes a very heavy toll on both parties. It feels violent, without being bloody, which is very impressive (at least in my book).

This entry was posted in commentary and tagged action, close reading, fight scene, guardian of the sacred spirit, seirei no moribito. Bookmark the permalink.