Death of the Animator

A strange and twisted journey into methodology, during which I will kill off all animators, everywhere, namecheck the Father of Western Literature and (the ultimate challenge) talk about Gundam without boring people who aren’t interested in Gundam.

Why the busty succubus? Read on to find out, or perhaps to find out why that’s the wrong question. Alternatively, if you’re not very interested in ‘Theory’ with a capital ‘T’, go read another anime blog – there are plenty of good ones out there – and wait for my next entry.

I read. Reading is what I do. While I read, I try to analyse and interpret (I pay good money to be trained to do this, after all). Something similar happens when I watch anime. The amount of anime-related opinion out there (the otakusphere?) suggests that pretty much everyone else does, to some extent, too.

Now, my literary background would suggest that in the terms of this distinction, I am more of an ‘anime literaist’ [Audit Trail: that distinction was discovered via another blogger’s methodology entry]. This is probably correct, though I hope I have demonstrated that I do pay attention to visuals.

[While I’m on the subject, I will note that I find ‘literaist’ a clumsy term. Personally I would prefer ‘anime littérateur‘ or ‘anime literatus‘, depending on the pretentious language of your choice. Also, it strikes me that the otakusphere as a whole may be skewed towards narrative/textual approaches, as ‘visualists’ are less likely to be interested in writing about anime – though there are plenty who are, I’m sure.]

The following piece of methodological theory is, therefore, inspired by a critical position I adopt when I read text. It’s also quite possibly wrong, and almost certainly a position which I will ignore or break regularly . . . but, as they say, ‘If life gives you hypocrisy, get blogging.’ Let’s use an example of analysis, one which doesn’t contain spoilers and hopefully will be fairly simple, and accessible regardless of taste in anime. This will help me to isolate what I want to talk about. So, hwaet!

Ignoring context, terminology and background information which would only be of interest to Gundam afficionados, this is a beam saber being thrust through the mono-eye (main camera) of a giant robot, by the very first Gundam. The battle is taking place in a harbour. The more Classically-educated among you may already have spotted a possible allusion. Yep, as always [?] it all comes back to Homer, in this case a passage from the Odyssey which I will quote at length (Rieu’s translation, Book IX; warning, graphic description ahead):

Seizing the olive pole, they drove its sharpened end into the Cyclops’ eye, while I used my weight from above to twist it home, like a man boring a ship’s timber with a drill . . . In much the same way we handled our pole with its red-hot point and twisted it in his eye till the blood boiled up around the burning wood. The fiery smoke from the blazing eyeball singed his lids and brow all round, and the very roots of his eye crackled in the heat.

Phew. And there isn’t even a Parental Advisory sticker on this . . . at least I finished the quotation before the aural simile describing the hissing noise of the eyeball burning.

Anyhow, I sit there seeing this for the first time, and I think to myself: ‘Is this an allusion to the blinding of the Cyclops?’ Then I think: ‘What did the animators and director intend? Could they have been alluding to the Odyssey?’ The similarities are certainly suggestive – the giant robot’s eye is obviously Cyclopean in design, and it’s being destroyed by a thrusting, heated weapon (and the act is in a nautical journey context). And it’s quite possible that the animators were familiar with Homer.

Then again, it could just as easily be coincidental. If the pilot of the original Gundam wanted to blind this enemy, he would have to destroy the mono-eye; I doubt that Gundam was equipped with beam sabers, and the enemy given a Cyclopean eye, in order to make a throwaway allusion. Also, Mobile Suit Gundam isn’t ‘deep’. It isn’t layered with (complex?) symbolism (I’m looking at YOU, Evangelion) or loaded with literary references to the point of nausea (I’m looking at YOU, Ghost in the Shell 2: Innocence).

Now, all of the above thinking is based on a fallacious premise: that meaning (read: symbolism et cetera, et cetera) comes from the studio, the director and the animators. This kind of thinking leads to an image of the analyst/blogger/reader as something like this: 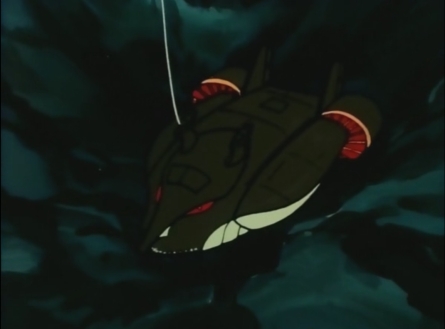 I realise water doesn’t show well in static images, but this is (trust me) a submarine

The analytical submarine blogger descends into the anime he’s watching, attempting to catalogue all the messages intentionally implanted in the series by the studio. Obviously, some shows are deeper than others, like different oceans. There’s also, in this model of analysis, a bottom limit – when the submarine reaches the seabed, or the critic discovers the author’s intentions – beyond which the analysis cannot progress. Barthes, in an article which helped to inspire this entry, described this limit: ‘when the Author has been found, the text is explained – victory to the critic’.

There are two major problems, as I see it, with the Submarine Model of analysis. It is impossible to succeed – you can’t really reach the bottom – I’m not Hideako Anno, so I’ve no idea what he’s thinking. Even if I am Anno, I’m still not the same person as the Anno who produced Neon Genesis Evangelion.

The other problem is that meaning doesn’t happen (at least for the analyst) in the minds of the animators; it happens in the mind(s) of the viewer(s). The blinding of the Cyclopean giant robot works as an allusion to the Odyssey if you’ve read the Odyssey. If you haven’t, and no one points it out, it doesn’t exist. No point agonising over the animator’s intentions. What the analyst needs to track is the relationship between the content of the anime and the mind of the viewer.

The better model for analysis is something like this: 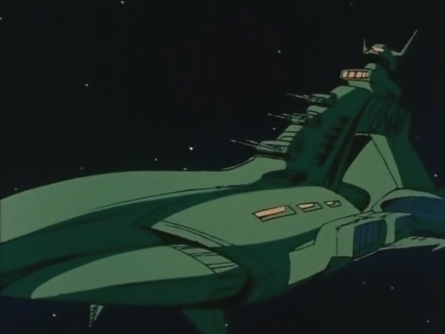 Ladies and Gentlemen, the Spaceship Model of analysis, where you can go pretty much where you want. In fact, this explains why Submariners couldn’t find the bottom of the ocean: they were on a spaceship all the time, they just hadn’t figured out how to use the instruments and controls. Once you know you’re on a spaceship, you can pretend you’re on a submarine (talk about the animators’ intentions) if you like, but you always know that really you’re on a spaceship, so you won’t make any disastrous errors.

Now, if interpretative meaning resides in the viewer, not in the anime, then there is no such thing as ‘deep’ or ‘shallow’ anime; there’s just anime, with deep and shallow viewers, and deep and shallow discussion. (And this is where the possiblities for ego-inflation begin: consider for a moment whether you consider yourself a deep or a shallow viewer.)

In fact, much, much more fun can be had extracting meanings from a light fanservice show (if you enjoy it) than from something which shoves symbolism in your face (hello again, Evangelion, and hello ef). And the meaning of light and fluffy shows is more insidious: a Dark and Symbolic show signals that it wants to make you think, while the possible messages of things which are ‘just entertainment’ sneak past your radar much more easily.

[This is ‘Why I Didn’t Watch ef‘: if you’re getting wrapped up in analysing things that the animators have provided, you’re being suckered into playing their game. Behind SHAFT’s idiosyncratic approach to animating it, ef may or may not have a brilliant story full of pathos and drama, but life is too short for all the drama out there.]

Ultimately, however low in quality something is, 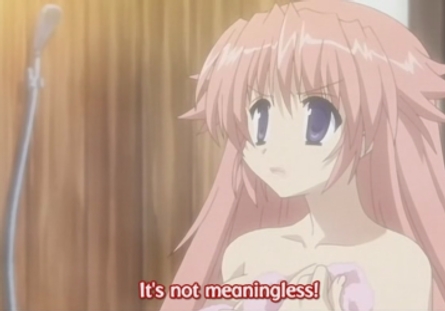 An example of a light fanservice show, though it wandered a little from its roots

In truth, this is probably an extreme position, taken up only half-seriously. At the least, I am arguing that less attention should be paid to the animators’ intentions, paving the way for inventive readings of anime – any anime. And, as I warned initially, I’m unlikely to ever actually manage this, so it’s probably a case of ‘Do as I say, not as I do’.

I would welcome objections.

[The busty succubus? Well, you shouldn’t be asking why I put her there, but what her presence does to your mind. Because this is about you the reader, not me the blogger. For the record, it’s because I like the repetition of ‘bus’ in ‘busty succubus’, and it’s up to you whether or not you believe me.]

27 responses to “Death of the Animator”