This is what happens when a Victorian imagines a knight¹

[This is part of a series of entries considering GAR. The first one sets out what’s happening. The second one reinterprets the epic tradition through the lens of GAR. The third one examines the relationship between GAR and gender.

Contains minor-to-moderate spoilers for Akagi and for the first sixteen episodes of Kaiji.]

Akagi and Kaiji are closely linked by sharing the same manga-ka and by the similarities in their anime adaptions. Comparisons are quite revealing, and allow us to draw some wider conclusions about the nature of GAR, as well as the role of weakness and sacrifice.

Akagi is considered to be more-or-less the embodiment of cold-blooded GAR. He carves a path through the underworld of mahjong, dissecting his opponents’ minds and then crushing them utterly in a wave of double, triple, quadruple and quintuple-bluffing; he is prepared to risk death – and a nasty death at that – to succeed; and he takes positive pleasure in the disintegration of his enemies. Light-o and Lelouch pale into insignificance next to Akagi: unlike those pretenders, Akagi never begs for mercy – he never needs to.

But Akagi isn’t human. In fact, Akagi is Alucard.

Bear with me here. Alucard is of course the uber-vampire from the manga Hellsing (twice adapted into anime form), who wields an array of magical powers, a pair of oversized firearms and superbly over-the-top dress sense in the service of the Hellsing Organisation, defenders of Crown and Church.

Alucard is essentially despicable, a gruesomely violent fighter who takes great pleasure in causing pain and death (he’s also brilliantly snobbish about inferior vampires). But because Alucard serves a ‘good’ master, he only ever fights opponents who are mad or bad or some combination thereof. And so we find it acceptable to cheer him on.

Akagi is Alucard, except with Man Gans instead of man-guns. Akagi, like Alucard, enjoys taking his opponents apart; the difference is that Akagi does it mentally where Alucard would do it physically. And Akagi, like Alucard, is very, very hard to defeat. Just as Alucard laughs in the face of decapitation [now there’s an odd phrase], anytime anyone thinks that they have Akagi on the ropes, they’ve usually just been playing into his hands all along.

Akagi is essentially evil – or perhaps ‘inhuman’ would be a better word. Akagi is summoned by Nangou’s wish for help, even from a demon; by rights he should be dead, having plunged over a cliff in a suicidal game of chicken. And then there’s the pleasure he takes in his enemies’ disintegration, and his absolute lack of sympathy for anyone. He’s more a force of nature than a human being, utterly inhuman in his willingness to throw his life away – in fact, he seems to have a positive will to death (not dissimilar to Alucard’s search for worthy opponents). 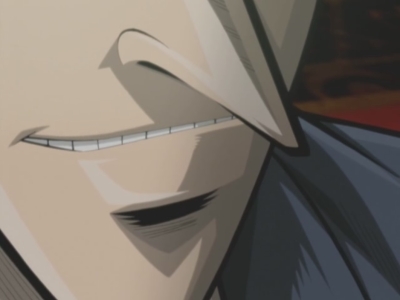 But we can cheer for Akagi because, like Alucard, he fights monsters. Akagi’s opponents all take similar pleasure in defeating their enemies. Several of his earlier opponents are physically deformed – Urabe has a bizarrely protruding set of teeth, and Ichikawa is blind – but it’s the series’ final and most compelling villain, Washizu Iwao, who is most overtly monstrous: the characters refer to the plan to defeat him as ‘monster hunting’.

We see that Washizu is corrupt, murderously vampiric and certifiably insane, and that’s before it’s revealed that he believes himself to be – indeed, judging by the animation, may actually be – possessed by demons. Credit should also go to Tsukayama Masane’s brilliantly guttural voice acting, which works so well with Washizu’s lengthy internal monologues.

Then there’s the painting of a devil on the wall behind Washizu’s seat, which is frequently drawn to the viewer’s attention. Since it’s devouring someone, this may in fact be the devil, as portrayed eating Brutus, Cassius and Judas in the Divine Comedy. [A common reading is that the three sinners being eaten were chosen as archetypal rebels against the proper spiritual and temporal order (betraying Christ or Caesar); one could link this to Washizu’s role as a blackmailer of politicians and a subverter of democracy, rich enough to effectively rule Japan behind the scenes.]

With opponents like these, we can accept the painting of the Crucifixion behind Akagi’s seat. The painting suits his preparedness to lose his blood in his attempt to defeat Washizu, but I think the resemblences end there. Akagi is a conscienceless assassin, not perhaps immoral, but most definitely amoral. It may bethat the cold-blooded GAR which Akagi typifies is inherently rather amoral – looking at other examples (I mentioned Light and Lelouch), there seems to be evidence to support this.

What a contrast, then, to Kaiji! Kaiji is really a bit of a loser. I wouldn’t say he is even especially good at gambling in the same way that Akagi is (though Kaiji rarely gets to play complex games anyway); rather, he’s good at perceiving the way systems work.

Kaiji also cries frequently, and I don’t think the tears are always MANLY. Certainly they are on occasion mourning something valuable (‘ISHIDAAAAAAAAAA!’), but sometimes Kaiji is simply crying because he’s been beaten, or because he’s in a difficult situation.

This is not to criticise Kaiji – I’d cry too in some of the predicaments he finds himself in – but to show that he’s not, in simple bravery terms,like Akagi who, for example, takes an undeserved sword blow to the shoulder and merely sweats a little more. It’s Kaiji, not Akagi, who’s ‘The Suffering Pariah’ – I’m not sure Akagi suffers, in a normal, human sense.

Kaiji isn’t as brave. But the GAR provoked by Kaiji is better quality. There are two reasons for this:

When first considering the Human Derby, I wrote:

it’s quite GAR to try to succeed by pushing and suceed, but that it’s even more GAR to recognise the competition for what it is (fundamentally an evil system) and have the (moral) courage necessary to reject it.

You’ll note that I slipped the phrase ‘moral courage’ in there, with self-effacing brackets around the ‘moral’ content. Moral courage is a rather antiquated description for courage which is displayed not in the face of physical danger (guns, knives et cetera) but in the face of overwhelming contrary opinion or a general atmosphere of turpitude. [Once I let myself release one old-fashioned word from its rusty chains, another will soon follow.]

Now it’s time to remove those brackets around ‘moral’ and consummate the comparison: what I’m arguing for is ‘moral GAR’. Moral GAR is the courage to fight the same over-the-top, GAR battle we’re now familiar with, but with an added refinement of self-sacrifice and compassion, often against prevailing behaviour (as the Human Derby revealed, plenty of people are willing to push others off the girder of life when the chips are down).

Not that the standard rewards for success are bad things. I do not wish to denigrate normal GAR or to draw too strict a distinction between GAR and moral GAR. They shade into each other. But the more inhumanly competent (Akagi) a character is, the harder it becomes for him (or her) to make sacrifices or to face impossible odds, while it’s Kaiji’s very humanity that lends his particular blend of GAR its nobility.

1. Note the long hair, the vapid expression and the suspiciously unadorned surroundings (suspicious, that is, in a pre-Reformation context). Also, I’m no biologist, but wouldn’t lactic acid from an oxygen debt be hurting his arms, holding that sword up for a sustained period of time?

2. Unless you, dear reader, are actually successful like Akagi, and are in possession of wealth, fast cars, attractive members of the opposite sex and a big house. If this is the case, may I recommend some cheering meditation on the Danse Macabre and on Breugel’s Triumph of Death. (The Animanachronism – depressing rich people for more than a month now.)