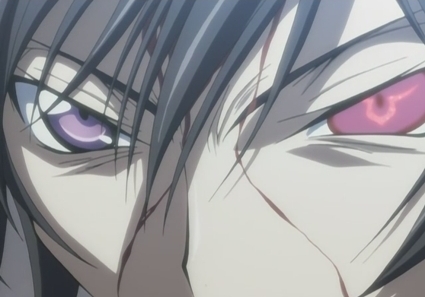 This entry, like many others, began as one of ‘those’ comments on someone else’s blog; you know the type, a comment which makes you run Notepad so you can save drafts and print proofreading copies, a comment which stretches down the narrow comment field like the ever-rolling stream of time itself. The blog in question was iniksbane’s. His remarks on Kaiji and Lelouch prompted me to once again enter the field wearing Code Geass‘s token.

Kaiji and Lelouch both seem to defy categorisation – almost always a good thing, when it comes to characters – and I hadn’t considered comparing them. I think iniksbane neatly nails down Kaiji’s character: Kaiji has a clearer vision of the choices he’s faced with than the other debtors, hence his realisation that pushing someone off his girder and then apologising is stupid, but he’s incapable of being the cold bastard that he’d like to be (and perhaps that the yakuza would like him to become too). In fact (extemporising here) part of Kaiji‘s appeal is that Kaiji sometimes manages to fight his oppressors’ dehumanising systems by becoming more rather than less heroic in his behaviour.

Normally I try to restrain myself from looking too closely at characters, but I’m not so sure I agree with iniksbane about Lelouch. I’ve struggled to describe Lelouch in the past, but I’ll take another wild stab at my own understanding of him here (spoilers ahead, of course).

Lelouch is plagued by a contradiction between his motivations and his method. Lelouch’s motivation is familial affection (viz. his vision when he thinks he’s about to be shot in the first episode), and Lelouch has two goals: to avenge his mother and to protect Nunally. Lelouch’s chosen method, the amoral and Machiavellian manipulation of an entire country, requires him to become the inhuman character, Zero. (What is a zero but an absence? What is his mask but, unlike the masks of many other heroes, the total absence of a face?) 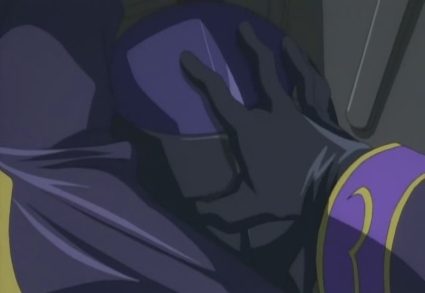 Zero – the Zero that Lelouch wishes to be – has no emotions, so that he can ‘spend people’s lives like chess pieces’, which is (as far as Lelouch is concerned) the best way to fight a system which spends people’s lives like chess pieces (the Britannian form of social Darwinism). Of course, Kaiji would see things differently, but then (although he starts out as a loser), Kaiji is a (physically and mentally) more mature character. Lelouch is very intelligent, but he’s also a teenager, and very intelligent teenagers have a tendency to overlook things, like the ability of a childhood friend to run along a wall while dodging an auto-targeting machine gun despite the fact that said childhood friend claims to be ‘only in the engineering corps’.

Another important thing that Lelouch overlooks is the paradox of wanting to become Zero. He wants to become Zero in order to pursue the goals of familial affection, but in order to successfully be Zero – spending people’s lives like chess pieces – he has to abandon affection of all kinds. Zero’s not a human being, he’s an existence dedicated to getting more power. In fact, Zero’s insane. It’s the relatively familiar idea of the hero who sacrifices what he’s fighting for in order to fight at all, although it’s packaged very well. A third thing that Lelouch overlooks is the problem of if or when his Geass might grow in strength enough to be an inconvenience. Am I allowed to say things like ‘hubris’ and ‘hamartia’ yet?

[For this and other reasons, my one and only prediction for the second season is that Lelouch will lose either his left eye or both of his eyes. Predictions are a mug’s game, but I can’t resist making this one.]

When the human excrement impacts on the rotating, ceiling-mounted air-cooling device in Episode 23, we see Lelouch successfully abandon Zero, only to have his success undermined by that third oversight. And for a while in the two closing episodes it looks like he’s become closer to Zero than ever before (and considerably less sane, too). But when finally faced with the difficult choice that he’s set up for himself – be Zero, abandon Nunally and conquer Tokyo, or be Lelouch and rush to Nunally’s rescue – he chooses his ends over his means and abandons the Black Knights to their fate at the hands of the resurgent Britannian garrison. 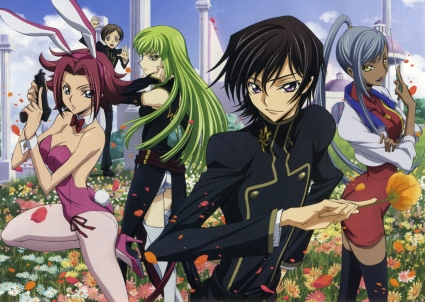 I don’t know what’s more confusing, the placement of a flower-wielding, wasp-waisted bishonen among fanservicely beauties, or the fact that the New Boy appears to be dancing in the background

Unfortunately by the time of the final Mexican standoff the dramatic preceding events have made it much harder for Lelouch to unmask himself, to divest himself of Zero quickly and easily. This is why we are presented with Lelouch as an arrogant, almost-incoherent, manic walking bomb in the closing scene. Reality repeatedly pointed out to Lelouch that he couldn’t have his cake and eat it too – be an inhuman, unfeeling monster (a Machiavelli) in order to be a loving brother (a siscon)¹ – and Lelouch ignored reality. The result is a tragic parody of a human being, a masked actor who’s become the part he thought he was playing. (And there certainly are a lot of actors in Code Geass, which is a very self-consciously theatrical series all round. But that’s a topic for another day.)

So I suppose where I differ most from iniksbane is that I never thought Lelouch especially cared about what happened to Japan, except as far as it affected his own plans (to defend Nunally and kill his father). Lelouch did form some attachments to the Black Knights but not, I feel, very many, and he was prepared to abandon them when Nunally was at stake. But I think the idea of recapturing emotional distance is a useful one, although I would remove the ‘re’: Lelouch is constantly trying to capture an impossible emotional distance.² Lelouch is an emotional teenager seeking to be Death Note‘s Light. But Light really is inhuman, though not infallible, and is motivated by far more abstract ideals: Lelouch hates his dad and loves his sister, but Light hates crime. [Also, Death Note has too much exposition and too few mecha. Talking makes my brain hurt.]

1. I’m intentionally misusing ‘Machiavelli’ and ‘siscon’ here. Machiavelli wasn’t as evil as his detractors would have you believe, and (doujinshi excepted) there’s no real evidence that Lelouch loves Nunally in any non-fraternal way. ‘Siscon Machiavelli’ seemed like a good, if hyperbolic, way to sum up his attempt to combine affection and emotionless pragmatism.

2. This is a good example of someone kicking reason to the curb when he really shouldn’t.