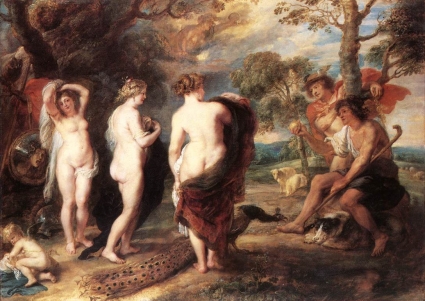 I finally thought I had conquered the urge to compare what are probably anime’s two most prominent mecha franchises, and Washi had to go and open the contrast-floodgates which I had just managed to close. Of course, I haven’t seen enough of either to properly do the job justice (Kaioshin ought to write this), but sometimes in life we simply have to use the best tools we have to hand, just as sometimes in anime we simply have to rely on the untrained teenager who’s been accidentally thrust into the cockpit of the military’s latest toy.

Macross and Gundam seem to demand comparison, but they’re really rather different breeds of mecha. The key distinction between them, as I see it, is that (most of the time) Gundam takes itself very seriously – for a mecha action franchise – and expects you to do the same. When it works, this makes for anime which can be unsettling, laden with pathos and at the same time full of giant robots, fighting. This can be thrust home with the force of a flèche (0080) or gently served up with the nukes covered in Ghiblesque honey (∀ Gundam), but it’s usually there. And I’ll pre-empt mentions of G Gundam by pointing out that it’s a series about betrayal, set on a dystopian prison planet which happens to be Earth (just with added hotbloodedness and the yelling of attack names).

Unfortunately, when this demand to be taken seriously doesn’t work, the result is great, clanging moments of bathos mixed in with giant robots, fighting. It’s hard to be really moved by Gundam SEED unless you’re fourteen years old, and ZZ‘s Space Aztecs do not a plausible faction make. When a show demands serious treatment but doesn’t back up its claims with credible behaviour, it looks like a precocious ten-year-old misusing long words. Gundam 00 creates a different but similar problem for itself by demanding, very forcefully, that you take it as a Serious Story, while at the same time refusing with equal force to be novelistic or to pretend to be realistic, which turns a lot of fans off. (This is not to say that you can’t do comedy seriously: The 08th MS Team‘s Eledore is sometimes hilarious and sometimes heart-rending. Serious comedy was something the early-modern humanists specialised in – but I digress.) 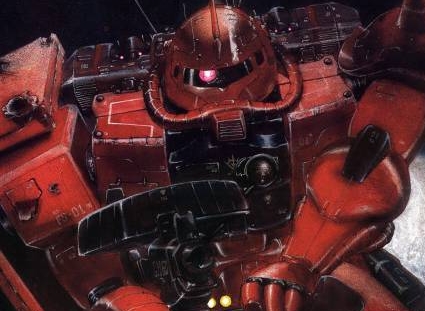 Macross (in general) isn’t really interested in how seriously you take it. It’s space opera, and it hits you with the all the bombast of men and women in ridiculous costumes singing in a foreign language about how they’re going to stab each other. As with comedy in Gundam, this doesn’t mean that Macross can’t be saddening or thought-provoking – I for one found the return to Earth in Do You Remember Love? incredibly bleak – it means that the focus and drive of the storytelling lies in a different place. (A love-triangle-ey place. Stick to Gundam if you want to avoid girl cooties.)

This difference – that one franchise wants to be taken seriously, and the other doesn’t – plays out very clearly in the way their worlds are usually constructed. As science fiction, Macross is much softer than (most of) Gundam. This is not to say that Gundam is particularly hard sf – bipedal war machines are hard to swallow even in Gasaraki (and remember that in Gasaraki they’re really biological) – but a moment’s thought will reveal that Macross’s world is in many ways the sillier.

Macross has aliens, sentient computers and faster-than-light travel, and the franchise is closely identified with mecha that not only transform, but transform between three rather than two configurations.² Oh yeah, and there’s the music thing, too. Gundam restricts itself (Crossbone excepted) to the area of space around the Earth and restricts itself absolutely to (usually colonial) wars between human factions. No A.I., no aliens, no foldspace – and even in SEED the songstress halts war not by singing, but by ordering that things be blown up until people stop fighting. To put the contrast another way, The Super Dimension Fortress Macross has Boddole Zer puzzling over the mechanics of kissing; Mobile Suit Gundam has Giren Zabi’s frighteningly naive exchange with his father about Hitler. 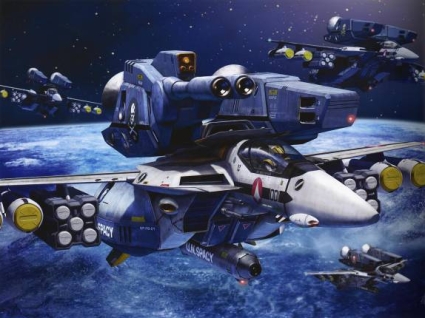 In truth, it’s unfair to compare the two. There’s less of Macross, it’s produced less frequently, and as Washi points out it forms one coherent(ish) continuity. And I suspect that those who identify themselves as ‘Macross fans’ are a rather more united house, too – after all, there are fewer Macross series, OVAs and movies to champion. Gundam’s almost too big. Bertschy (not, I know, the otakusphere’s best friend) remarked that ‘the whole franchise is so vast that hardcore fans are more likely to self-identify as “Gundam Fans” rather than “Anime Fans”.’³

And if you insist on asking, with Ali G, ‘But which one is better?’, I have to say ‘Gundam’. Macross – what I’ve seen of it – can be great: great-looking, great fun, great characters and great action. At its highest moments, however, Gundam – what I’ve seen of it – can be something transcendent. Even ignoring its finest hours, it offers such breadth of choice and – like a collection of poems – so many variations on its themes and permutations of its designs that it’s a whole world unto itself. I hardly need mention its influence.

Macross is nice, I loved the parts of it I’ve seen, please watch and buy both Macross and Gundam (and Yamato too). But, if I may be permitted some Jonsonian hyperbole, it’s Gundam which is a franchise ‘Not of an age, but for all time!’

[It’s also Gundam which is dominating my tagcloud like Godzilla astride the Tokyo skyline. Help. Send lawyers, guns and money.]

1. Rubens is really ramping up the fanservice on this blog – people are going to start thinking this is Derailed by Darry, or something.

2. Iniksbane recently pointed out that the prevalence of transforming mecha in Zeta Gundam added an element of cheesiness which damaged the series’ desire to be Taken Seriously. Of course, the focus on transformers (with a lower-case ‘t’) in the series may have been caused by the popularity of SDF Macross, but whatever the reason I agree with Iniksbane that they didn’t mesh very well with the general Tomino-ness of Zeta.

3. ‘Self-identify’ is horrible. Kill it. Kill it with fire.