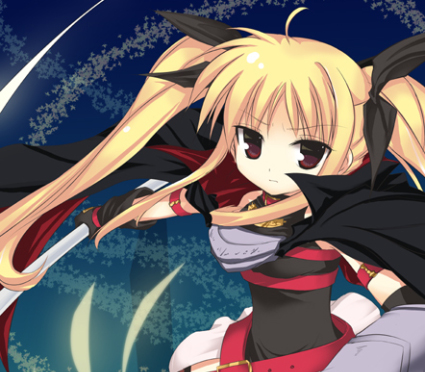 Except, it seems, one can watch mecha all of the time. For Nanoha has mecha, both in the broad Japanese sense of the term and in the limited English sense. Bardiche and Raging Heart have blasted their way into my mental list of ‘Great Moments in Mechanical Design’, venting steam and reconfiguring themselves like staves are the new Variable Fighters. Then there were the allusions to Gundam – an Argama-esque ship, the style of the action and even a hint of a Char in the blonde antagonist with perfect personal integrity.

Much to my surprise, those weren’t the only things I liked about the show: the action in general rocked like The Who live, and the story was well-executed. I would have liked the show to have had a bigger budget, but I hear good things from friends about the sequels.

[This has also prompted me to come up with another of those ideas for new anime. Along with Spice and Woolf, I now want to see The 08th M(ahou) S(houjo) Team, a grim and gritty story about a squad of moe-moe nine-year-old girls caught up in a war much larger than themselves. At the end the heroine loses a limb, but finds love with a kawaii shota mage from the other side. Goro Taniguchi: pick up the phone and give us a call – my people can talk to your people. Let’s stick this idea to a church-door and see if anyone reforms.¹]

The space fortress A Baoa Qu is the Duchy of Zeon’s last line of defence.

Anyhow, philosophy. Philosophy and what I’m going to call, in my high-falutin’ way, ‘the Narrative Arts’ have an uneasy relationship. Stories, told well, are emotive and powerful. People pay attention to them. This makes storytelling a great way to raise some fairly serious questions. The Epic of Gilgamesh, for example, has sex and violence aplenty, but what it’s essentially about is mortality. (Which is why it’s aged so well. Try calling that irrelevant.)

Unfortunately, and very frustratingly for philosophers, stories are really, really bad at actually properly answering the questions they raise without slipping into allegory or fable. This is partly because stories are – probably for the same reasons that make them so emotive – often very reductive: ‘The personal is handsome and potent. The system has a beard.‘ This is (I think) why philosophers are prone to drawing examples from the Narrative Arts for illustrative purposes; if stories were a proper medium for logical discussion, they wouldn’t have to do this. They’d just become novelists. Consider for a moment how many stories you can think of which aren’t overt allegories or fables yet still manage to raise a ‘deep’ question and then provide a logically coherent answer.

This is what makes Fate Testarossa so interesting. She’s obviously an interesting character, but she acts as a thought experment too. Philosophy teachers have a massive armoury of these things they can select from when they want to make you think, and Fate reminds me of the kind that are designed to make you wonder where personal identity resides.

The rush of the moment, the flow of experience which we’re constantly filtering, is uncapturable. If you try to hold a particular moment, it’s gone into your memory. Memory’s a terribly fragile thing: we forget things, people are capable of unknowingly falsifying their own memories, and suggestions from others can alter memory too. Plus it seems to be in some worrying way connected to our faculty of imagination. Unfortunately, if it’s past experience that shapes us, then in some sense it’s this tenuously-held past experience that is us.

One of the questions commonly posed is ‘What if the universe and everything in it, including your memories, were created three seconds ago?’ (Or three years ago. By this genki girl who’s obsessed with the paranormal . . .) Are the memories valid? Since we wouldn’t be able to tell if this was the case, is the question itself at all valuable? Fate poses another problem about memory. Precia lost her real daughter, Alicia, and cloned her to produce Fate. Precia put Alicia’s memories into Fate’s head. Is Fate Alicia? So far, so normal: Nanoha‘s raised an interesting brain-teaser. This is what stories do.

What Nanoha does next is unusual. It proposes (as I read it) a particular stance on this problem. As far as Precia was concerned, Fate didn’t work: she didn’t function as a proper replacement for Alicia. But – here’s the clever part – this wasn’t because Fate was a bad copy. As might be expected from someone given a name different from the one she remembers, it seems that Fate diverged from the Alicia norm: she was a better daughter, less selfish and more devoted.

But the problem lay not with Fate but with Precia’s approach, as epitomised by the use of a different name. Fate wasn’t different to Alicia at her creation, but Precia knew that Fate was a creation. Hence the different name (Fate is named after one of Precia’s research projects) and Precia’s harping on about her daughter’s artificiality in the eleventh episode. Right down to the name, Precia is unable to accept her cloned daughter as her real daughter because she knows it’s/she’s a replacement (this being anime, she has the real daughter in a jar as a constant reminder).

The implication is that if someone else had cloned Alicia, inserted Alicia (I)’s memories into Alicia (II) and then replaced Alicia (I) with (II), there would be no problem. Ignorance would be bliss. The dramatic effects on Fate’s own personality of Precia’s inability to accept her suggest a startling conclusion: while character might perhaps reside in your memories, your identity resides in your relationships with others and their attitudes towards you. (For further evidence, I’d turn to Fate’s psychological recovery in the twelfth episode: she examines her relationships with everyone around her.) 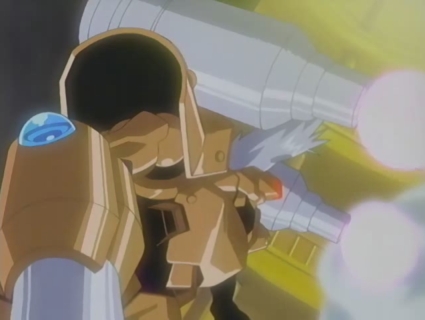 They tell me that Japan is a more collective/communal society, less affected by the post-Enlightenment, post-Reformation focus on the individual which I’m used to (I’d say ‘we’re used to’, but I’m aware that you, dear reader, might not be a white, Anglo-Saxon Protestant). If this is the case, one could draw a cheap causal link here, although I’m not going to because I’m not an anthropologist or an expert on Nippon.

What I will do is qualify this entry. Unlike most stories, Nanoha proposes an approach to at least one of the brain-teasers it poses. What it doesn’t do, however, is propose it in a clear and logical fashion; to do that, it would have to be a (non-fiction) text, not an anime series. In fact, the problem/solution structure has to be teased out by the viewer – once again, this underlines the importance of what the viewer can bring to table – or perhaps even forced onto the show by the viewer. Is what I have done in this entry really very different from the standard philosopher’s raid on storytelling for a good illustration? (Apart from the fact that a proper philosopher would put it better, with syllogisms and so forth.) We’re handling entertainment first and foremost here and, sad to say, you can only go so far by thinking hard about the stories you enjoy when you’re having fun.

(And finally, my apologies to any readers who actually know their philosophical stuff. It’s been some time since I stopped formally studying the subject, so at best this is probably the work of a well-intentioned amateur. I’m pretty sure of my ground on the ‘stories usually raise questions but don’t answer them’ front, mind you.)

1. Because ‘Let’s run it up the flagpole and see if anyone salutes’ is so last century.

Given that I dislike duplicating what you can easily find elsewhere, and writing stuff that’s devoid of intellectual content, I didn’t want to devote a whole entry to this. But since we should all Do Our Bit . . .

If you run an anime blog and you haven’t heard yet, some awards are being organised. If I understand the system correctly, anime bloggers can nominate the blogs which they think are the cream of the community. (Maybe if I get enough nominations, I’ll marathon True Tears and Clannad.)

Joking aside, this could be a nice little project so if you’re elegible to nominate, go and support it (note ‘it’ not ‘me’). Hopefully this won’t go the way of SaiGAR.

[EDIT: Turns out I had my post slug entered into the password field. (!) I have rectified this; here’s hoping it didn’t mess up anyone’s RSS readers.]