A Paean For The 08th MS Team

From one red-haired Karen to the next, then. I’ve wanted to write about The 08th MS Team for a while, in the way that one aspires to a difficult accomplishment: it’s hard to write about something which is generally so well-regarded. By way of experiment I tried watching the whole thing last Sunday, in suitably tropical conditions with the sun beating down on my windows like The Sun beating down on Gordon Brown whenever he screws up. I still don’t know if I’m up to the task, but at least I had a fun day off. (Spoilers, of course.)

I’m always surprised by how – unlike The Sun – The 08th MS Team is rather apolitical. It follows the standard Gundam approach to the armed forces themselves – the higher up the chain of command you go, the more unpleasant types you find – but there’s little or none of the political commentary found elsewhere in the franchise. To compare OVA to OVA – and excluding IGLOO because I haven’t seen it – 0080 touched on neutrality, 0083 had nukes and fear as a political tool and (I’ll grudgingly include it) Stargazer examined the use of hate. These OVAs aren’t scalpel sharp dissections – they’re mecha action shows – but they do at least have a political dimension.

The 08th is, however, a war story, and a love story. I think the word ‘story’ must be stressed: this show’s realism is much-touted, yet in truth I’ve never found it especially realistic (if that is the right question to ask in the first place). It can be gritty and convincing, yes, but there’s also something operatic about The 08th MS Team, a sense of convenience and arrangement which at times makes it feel like a vision. This reaches its peak in the seventh episode, with the idealistic lovers bathing in anime’s best improvised onsen, surrounded by swirls of snow and ice and backed up by an unsettling string piece form Tanaka‘s excellent score. And at the close the same snow, or perhaps steam, seems to swallow Aina whole.

It may peak in the seventh episode, but this sense of vision permeates the show. Norris’s defeat of the 08th MS Team produced two iconic images: his Gouf Custom silhouetted against the sun, and the same Mobile Suit splashed with an unfortunate Guntank pilot’s blood. Both are iconic precisely because they are so patently built to please. Indeed, part of the pleasure in a lot of humanoid mecha is the way that, however loudly one tells oneself that these are just machines, the human mind will insist on perceiving living things (consider the defeated Zaku struggling to raise its hand in the second episode, for example).

[Is that last sentence evidence that I’ve failed to grow up? Probably.]

Even when the Team are fighting in the jungle, the show rarely resorts to ‘mecha obscura‘ à la Gasaraki: it’s easy to see what’s going on. Indeed, the jungle warfare is itself consciously picking up on the Vietnam War, or rather said conflict as it exists in the popular imagination. Although, as Author has pointed out, the actual situation of the Team is not like Vietnam – and the One Year War as a whole resembles a certain theatre of World War Two, right down to the sudden attack using a relatively new, carrier-based style of warfare. That is, however, a story for another time, and of course the weapons of mass destruction were unleashed at the beginning of the One Year War.

One of the shots Author picked out. I don’t know my way around shading, but I can tell when the animators are making the Shinigami’s head look like a skull. (Author also notes the Moral Grey Area Edition’s idiosyncratic aspect ratio.)

The opening scene of Gundam 00 is an interesting contrast to The 08th MS Team‘s air of the artificial. With its irregular focus, its haze of dust, and its shaky ‘camera’ struggling to keep track of the rampaging Anfs this sequence is of course obviously artificial in another way: it’s plain that we’re watching animation pretending to be a camera lens. But it tries to give the impression of something which isn’t arranged, mainly because the rest of Gundam 00‘s action is about to shove its choreographed nature in our faces with Wing levels of power imbalance. The contrast is necessary because Gundam 00 was in part about how unfair it feels when someone comes down from the sky in his overpowered lump of military hardware and proceeds to blow you away.

Funnily enough, this is part of what The 08th MS Team does too. It’s a story about a group of ordinary soldiers facing a prototype weapon, rather than (as with much of the rest of the franchise) a hero piloting a prototype weapon and killing ordinary soldiers. The Apsalus, in its several variants, is the suitably menacing zenith of the show’s generally excellent mechanical design, a hideously bulbous, gravity-defying monster which (brilliantly) retains the cyclopean mono-eye. Need I mention its gaping – mouth? – which we’re forced to re-examine when Aina suggests Ginias built it as a surrogate womb? 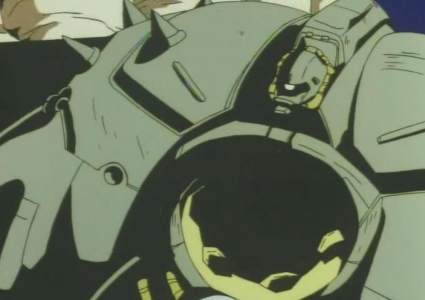 By such Freudian paths we come to the characters themselves, about whom I have little to say. To borrow Hidoshi’s words, since he puts it well:

The cast plays upon archetype quite a bit. . . . the typical characters of a wartime drama take the stage. But a cliché is not always a bad thing, and by and large the cast manage to escape their moulds and endear themselves to the viewer. They do nothing particularly new, but their showing is a strong one, and of a high calibre.

It is the cast of a wartime drama; The 08th MS Team is a wartime drama, more than any other Gundam I’ve seen and perhaps more than any other mecha anime I’ve seen. It takes a group of familiar people and puts them through some easily recognised situations – futile battles, love across a divide, a Dear John letter &c – but it does it with great panache, a compelling touch of opera and the roar of Norris’s 75mm shield-mounted Gatling gun (I’m salivating). What’s not to like?

The last episode, that’s what. Sinking to a homily on the subject of naming is simply gauche. It’s especially gauche at the end of a series which managed, most of the time, to convey its messages without shouting. I can see the arguments for having an epilogue episode. The Universal Century story, as a whole, is the story of different people repeating the same mistakes. A brief glimpse of a life outside warfare is a reassuring reminder that people can escape those mistakes, in the same way that Conrad, for example, is sometimes praised for highlighting the transience of imperial rule at a time when it could seem everlasting. (Similarly, War and Peace would be a lesser book if it was just called War.) 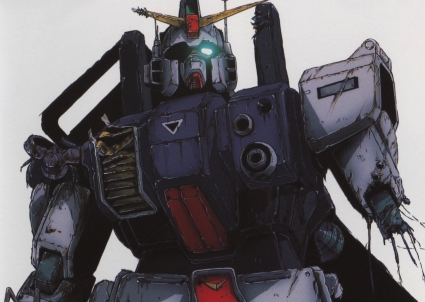 Infinite Ryvius – which is not a mecha show, but rather The Prince in the style of Dawson’s Creek, with fly-by-wire robots in the background – has an epilogue designed to do just that, to reaffirm that things can go right even if they’ve previously gone horribly wrong. G Gundam did something similar: the final five episodes might have been lacking in comparison to the superb forty-fifth, but they did remind us that winning the Gundam Fight wasn’t the point of the show. And ∀ Gundam is arguably performing this function for the entire Gundam franchise: one can escape the war, though one might have to be a cross-dressing chauffeur to do it.

Sadly The 08th MS Team does not benefit from its epilogue. The eleventh installment ended adequately – no, quite well, with just enough information about the lovers’ fate, and the sight of the unified Team running towards the Shuddering Mountain. The twelfth episode is an unfortunate superfluity in an otherwise restrained series, but then nothing ends perfectly. Our maimed hero, whose idealism had, at best, mixed results, would probably agree. The weak finish might leave The 08th MS Team looking like it’s missing a limb, but I can love it despite that.

This entry was posted in fanboy and tagged gundam, gundam 00, the 08th MS team. Bookmark the permalink.