Even the pushiest estate agent would have trouble selling me a house in Uoodo City. It’s an entirely metallic environment. We never seem to see the sky. The buildings are unreasonably tall, and instead of solid ground under your feet, you’re more likely to find cavernous metal spaces full of more unreasonably tall buildings. The police chief is corrupt and power-hungry, and his men are only really distinguished from thugs by their heavier armament. If you don’t fall foul of the police, perhaps you’ll be captured and put to work as a miner by the local gang of biking vikings. You could turn to religious consolation, but sadly the only priest we see is a conspirator in cahoots with the police chief. Oh yeah, and the rain can kill you – so listen out for those weather sirens.

[D]own these mean streets a man must go who is not himself mean, who is neither tarnished nor afraid. [. . .] He is the hero, he is everything. He must be a complete man and a common man and yet an unusual man. He must be, to use a rather weathered phrase, a man of honour, by instinct, by inevitability, without thought of it, and certainly without saying it.

For I think there are real affinities between the detective Chandler describes and Chirico Cuvie. Chirico might be younger, at eighteen, than Chandler’s heroes, but he’s certainly as jaded as they are. He is in effect prematurely aged by his experiences, by too much experience: he never displays enthusiasm, rarely even smiles. The resemblance is most striking when you look at Chirico’s place within this city, Uoodo.

In the paragraphs directly preceding the one I borrowed, Chandler describes his detective’s world, one in which the worst men (and they are always men) are simultaneously the most powerful, and one in which no authority cares for justice. This is Uoodo. And in interacting with Uoodo, Chirico breaks its systems because he is essentially (though he never says it) ‘a man of honour’. In his conflict with the police, it seemed to me that initially Chirico was simply fighting to survive. Very quickly, however, he shifts to fighting because of a mixture of a desire for truth and a desire to help someone. Unsurprisingly his opponents cannot understand (and consequently read far too much into) his actions.

Incidentally, he stands out visually too: at first sight, one’s impression is orange (the pilot suit) and blue (the hair) – which are, traditionally, complimentary colours. 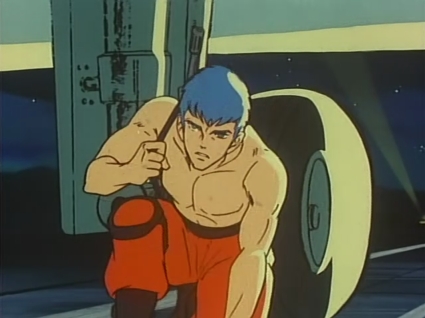 But Armoured Trooper VOTOMS isn’t simply mecha-noir (see The Big O, which is noir-tragicomedy climbing the Super Robot Tree), or hardboiled mecha because Chirico isn’t purely a hardboiled hero. He’s also very much a man of action, a role more suited to an eighteen-year-old. In the DVD commentary, Takahashi (who, incidentally, has a comfortingly avuncular voice) mentions the Rambo franchise as a possible influence. This isn’t the Word of God – I go on enough about the Death of the Author – but it’s a pretty obvious comparison. First Blood‘s clash between war veteran and legal authority springs to mind, though Chirico’s rather more sane than John Rambo.

VOTOMS is like a massive meal of action, with a vast variety of dishes. Coming straight from rewatching the first half of Gundam SEED courtesy of Beez’s recent box set release, VOTOMS‘s willingness to throw in different styles and settings is a pleasant surprise. There are sequences of danger, but not gunfire, like crossing a chasm hand-over-hand on a rope. There are also action sequences which are great fun while still completely devoid of mecha: bike chases, martial arts or simple (reliable) man-with-a-gun firefights.

And there are mecha, yes. The eponymous Armoured Troopers are another pleasant surprise. For a start, so far they’ve been interchangeable: Chirico prefers to use Scopedogs, but he doesn’t have a special Scopedog. In fact, before one particularly large battle, he actually has his friends bring along a second ‘dog for him to hop into when his first becomes useless. Moreover, Armoured Troopers seem unusually vulnerable (presumably this was what I saw extrapolated in Mellowlink). I recall one having a leg blown off by a policeman wielding a rocket launcher, and another Armoured Trooper is rendered useless when Coconna simply obscures its camera with an aerosol. Very much, as iniksbane says, ‘a mech that is ugly, utilitarian and kills people’, but also a mecha which is relatively easy to defeat.

This is not realism – Chirico can survive a hail of bullets like any other action hero – but it is convincingly gritty, which is all that’s necessary (or, probably, possible: I suspect ‘realistic mecha’ is actually an oxymoron). I’m quite happy with Chirico as a one-man army – a one-man army connected to a one-woman, two-man logistics corp.

Which brings us to Chirico’s companions. Gotho, Vanila and Coconna are certainly loveable rogues, and like Chirico’s opponents, they initially misunderstand his motives. Part of the fun of the Uoodo episodes is his companions’ gradual realisation that Chirico isn’t motivated by money; the writers bring this to a head in the ninth episode, which pits first the trio’s desire to escape, and then their desire to keep their recently-acquired wealth, against their affection for Chirico (with a suitably heartwarming resolution). They might not be especially deep characters, but they do their job well.

And that’s something I might say of VOTOMS as a whole, at least so far. There’s plenty to dig out of the show (I’ve already had enough ideas for at least one other entry on it, though whether I can manage to write that entry is another question), but most importantly it’s an entertaining mixture of science fiction mecha action, built around a suitably interesting hero and served up in a distinctive package.

Actually, I’m tempted to say that VOTOMS feels very, well, occidental to me. This is partly because Western mecha tend to be grittier than your standard Japanese designs, but also because I suppose I think of the action flick and the hardboiled novel as very American forms. (This is probably just what happens if you grow up reading Chandler and Hammett while ensconced in the (relative) safety of a provincial British city.)

It’s silly to start drawing strict lines, given how much borrowing has happened (in both directions): Red Harvest The Glass Key A Fistful of Dollars Last Man Standing Yojimbo is as hardboiled as one could wish. Takahashi himself mentions both Japanese and American influences in his commentary. And yet – maybe it’s just the labels I’m using to understand what I’m watching, but I can’t shake the impression that Chirico would fit right in in Hollywood.

Then again, perhaps that’s because he’d fit in anywhere. ‘He is the hero, he is everything.’

The story is this man’s adventure in search of a hidden truth and it would be no adventure if it did not happen to a man fit for adventure. He has a range of awareness that startles you, but it belongs to him by right, because it belongs in the world he lives in. If there were enough like him, I think the world would be a very safe place to live in, and yet not too dull to be worth living in.

This entry was posted in commentary, fanboy and tagged armoured trooper votoms, the simple art of murder. Bookmark the permalink.