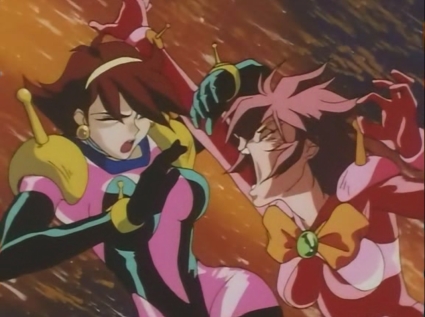 When I watched G Gundam I was confused by my inability to pick out why Domon Kasshu should be Japanese. The other Gundam Fighters take on national characteristics, after all. He could, I suppose, be a ganbariya-san but I’d say every G character is that (including the villains and the horse). Then again, British novels about Brits interacting with foreigners don’t emphasise their heroes’ Britishness, they emphasise their heroes’ normality (as a contrast to Johnny Foreigner’s amusingly weird traits), so perhaps something similar is happening here. Or maybe I just missed some obvious clues.

Domon’s status aside, if someone were to ask (like Zero in the eighth episode of Geass R2) where the ‘Japaneseness’ in G Gundam is, I’d point to Rain.

I find Rain quite interesting (stop sniggering, you at the back): for much of the series she’s restricted to maintaining Domon’s Gundam, being a conduit for information in battle (a bridge bunny without a bridge) and being hot in a subdued, short-skirted way (unlike, of course, Chibodee Crocket’s busty bevy of assistants). As G draws to its close, however, she becomes much more tightly bound up in Domon’s story as her family’s entanglement in the Kasshu family’s own troubles is revealed. Then, of course, she becomes, um, literally tightly bound for several episodes as the final ‘Let’s Rescue Rain’ arc kicks in.

Rain pilots the Rising Gundam (pictured above). The Rising Gundam is an extrapolation of the samurai-stylings of the original RX-78-2: it wields a naginata and a beam bow. It’s also ‘Rising’, and about the sum total of my knowledge about Japan as a child was that it was ‘the land of the rising sun’ (East, burning red, &c). When Rain uses the Rising’s ultimate technique her clothing transforms from the sci-fi shrinkwrapping worn by Future Century pilots into something more traditional. (Actually, I have a feeling she’s the only character who appears in traditional dress.) So, at least to a relatively ignorant foreigner such as myself, Rain, not Domon, is the most Japanese-seeming character.

I don’t think I have an explanation for this, though I there are quite a few things in G Gundam that bemuse me. (Since shrinkwrapping the pilots’ bodies is part of the pre-battle preparation, why are almost all the pilots male?) Thankfully, I can distract your attention by changing the subject. 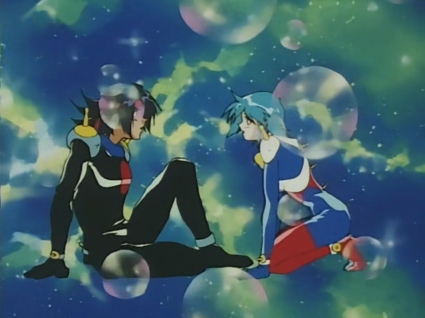 The background is UC Newtype-esque, but the bubbles are new . . .

Allenby is straight from the Gundam love triangle textbook, ‘a Four’ (and, more faintly, ‘a Lalah’) in the same sense that Zechs Merquise is ‘a Char’: she has Four’s hair and even meets the hero in the same place, Hong Kong. Allenby pilots the famous, feminine Sailor Moon Nobel Gundam and she does so very elegantly. She embodies G‘s whole ‘communicating with your fists’ thing nearly as much as Master Asia does, except when her military handlers switch on her Gundam’s Berserker System, turning her into a self-destructive fighting machine incapable of communicating via her fists or indeed through any other means.

(And Neo Norway has a Viking Gundam. I’m sure my Scandinavian readers – I know there are at least two – are facepalming.)

I do wonder whether the Nobel Gundam is called the Nobel Gundam because during a G Gundam planning meeting someone wrote ‘Sweden’ on a big sheet of paper and the first thing that came to mind was the Nobel Prize, but intentions aren’t what I’m interested in, meaning is. There is elegant meaning to be found here: Allenby unites something associated with idealistic hope placed in the best of humanity, the Nobel Prize (I think we should accept the pun on ‘noble’ at this point, and Wiktionary says that ‘nobel’ is Swedish for ‘noble’), with berserk, artificially-induced battle-frenzy.

It is significant that Allenby’s frenzy is artificial: G exalts genuine, truthful emotion (this ties into ‘communicating with your fists’), but Allenby can’t choose when to RAGE, she RAGEs on demand. Again, Four Murasame but transformed by the touch of the super robot into a character more easily comprehended by me (and, therefore, probably also by children). 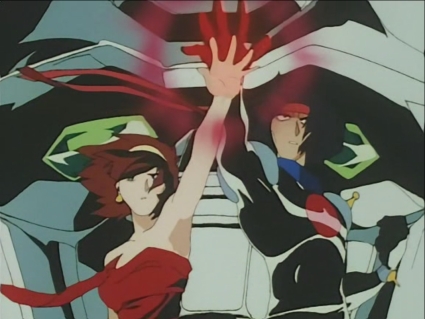 G really does like emotion. Although one segment focuses on Domon’s quest for a balanced calm which is more powerful than his usual rage, the closing story arcs revolve around strong feelings (‘His fist is crying!’, ‘Now is the time for your emotions!’) and the final battle ends with that memorable Sekiha Love-Love Tenkyoken attack: in this case ‘LOVE POWER’ really does ‘SAVE THE UNIVERSE‘ (or at least the Earth Sphere). This is unusually romantic for Gundam, and unusually upbeat too; hooray for super robots.

(Compare Gurren Lagann: the final attack of that story’s climax is powered by a sacrificial, homosocial transferal of energy from father-in-law-to-be to son.)

Interestingly, it is Allenby who explains Domon’s final problem to him: Rain isn’t a martial artist (despite her stint in the Rising Gundam), so Domon has to communicate with her verbally. Master Asia’s last breath (even more poignant for me after reading Steven’s remarks on ‘shishou’) marked the culmination of the ‘communicating with your fists’ theme, but also the end of fists’ usefulness and the end of the tournament which regulated the show’s violence; the final arc climaxes when Domon makes an everyday verbal statement (‘I love you’). G Gundam is one of the rarer parts of the franchise which isn’t directly critical of war (since the Future Century doesn’t have wars per se), but (intentionally or not) its final chord suggests that violence is insufficient.

[Credit is due to Deathkillz (???), who recently reminded me how much I enjoyed G Gundam]