In Which I Write an Episode Summary

These days it feels like writing an episode summary is a political act, and writing about old anime is always a slightly charged business, so when the Mighty Benefactor  who is subtitling Dougram took the time to do a first-draft set of subtitles for the first episode of Panzer World Galient, I thought I might as well combine the two activities.

Remind you of any other OP's first shot?

The opening narration places Galient‘s story within the wider set of rises and falls that ‘all living things insatiably repeat’, which reminds me rather of the medieval concept of the Wheel of Fortune. Then we’re shown a darkened city, dominated by a very practical-looking castle. It transpires that the queen has just given birth to a son, news which causes much rejoicing of the bell-ringing, cheering and beacon-firing variety. The new child’s moustached father names him ‘Jordy’. 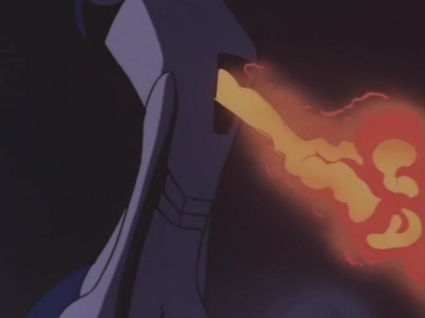 Suddenly, robotic legs tramp across the screen, spouting fire, and the city is assaulted by giant mecha centaurs.

THAT FIRE BEAMS FROM THEIR STOMACHS

Meanwhile, in the royal suite, the King tasks a burly retainer, Azbes, with preserving Jordy and the Queen, while he himself manages the defence. Azbes gets his charges out of the city, but then they’re attacked and the Queen is captured.

Azbes escapes riding a bird-lizard, and his pursuers are destroyed by beams from a bright light in the sky. A giant, tracked fortress like the one in VOTOMS: Big Battle rolls into the conquered city, and we’re introduced to the man who is presumably the villain of the piece. He’s certainly drawn like a villain:

Then there’s a timeskip. The narrator pops up again, and we realise that it’s actually Azbes. He explains that he’s raised Jordy as his own child, while travelling the planet in search of ‘Galient, the Iron Giant’, who is believed to appear when evil threatens.

Satisfy my curiosity: does this really work?

Jordy asks about his mother while they rest in a cave, and we cut to Mardal’s giant, searchlight-festooned techno-fortress-factory where she’s been preserved alive in some kind of green glass-like substance so that he can practice his villainous laugh on her.

If you ask me, that’s stylish villainy. Anyone can kill the hero’s mother, but it takes a certain kind of imagination to turn her into an art exhibit. This revelation also fills a couple of shots in the opening sequence, and their accompanying lyrics, with considerably more meaning. 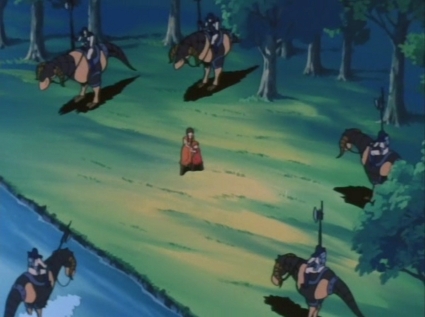 We return to what is presumably the story’s present day. Two girls have travelled too far from home, and are threatened by Mardal’s soldiers. Luckily for them, Jordy and Azbes turn up and a brief but energetic swordfight-cum-chase-sequence begins. 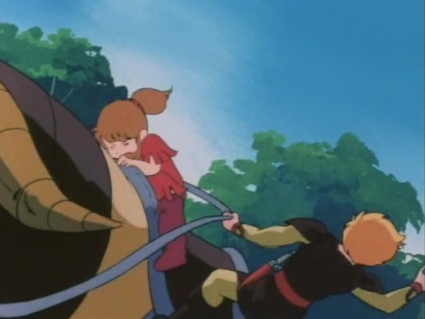 Here Jordy’s about to swing himself round under his mount’s neck. His horsemanship, or perhaps ‘bird-lizardmanship’, is top-notch.

With the soldiers dispatched, Azbes and Jordy accompany their new friends – the younger one is called ‘Chururu’, at least according to this translator – to a place called White Valley, where the episode ends.

There you have it: the first episode of Panzer World Galient. I don’t know why ‘Galient’ was chosen as a name, and I’m going to think of it as a combination of ‘gallant’ and ‘valiant’ for now. This is what Takahashi went on to direct, with some of the same team, after Armoured Trooper VOTOMS, which explains why Chururu’s mouth looks like Coconna’s, and why the Galient makes a very familiar sound when it skates towards us in the opening sequence.

Galient is, unusually, set in a fantasy world. I don’t know nearly as much as I should about ’80s anime, so I can’t say whether Galient was the first mecha anime to do this, or even the first ‘real’ mecha anime to do this. Actually, since (as the pen-and-paper RPG points out) most of the technology in VOTOMS is present-day stuff, Galient‘s giant mecha centaurs with beam weapons may have represented a move away from the understated mecha action aesthetics in ATV and Dougram. Whatever the facts of the matter, it’s certainly an piquant blend (Escaflowne, anyone?), and the first episode left me itching to see the Galient itself in action.

That in itself is a good point: the title mecha didn’t appear in the first episode, apart from the odd teasing glimpse in the opening and in the eyecatches. While there is, of course, no rule against a late mecha introduction in a show that’s only twenty-six episodes long, this does make me wonder if the writers thought that they might be able to get the show running for a few seasons longer.

As for the first episode’s story itself, I imagine the main objection to it is just how clichéd it is. I read a lot of fantasy novels during my early adolescence, and this (apart from the GIANT MECHA CENTAURS) is very like them. At this point one would normally say something about originality being overrated and possibly impossible; I would add that we could do with a return to a more medieval respect for people who replay the ideas of past authorities. I think I have a pocket tirade on ignorance about the past which I could deploy here, but I’m sure it would bore you, and in any case I just said that ‘I don’t know nearly as much as I should about ’80s anime’, which rather undermines my own authority.

Ah, well. I, for one, am quite happy to watch Jordy carve an utterly conventional path to vengeance and kingship, should any more delicious Galient get subtitled.

11 responses to “In Which I Write an Episode Summary”