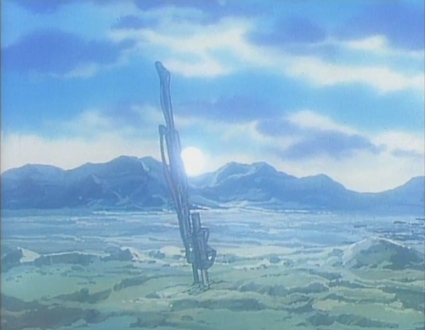 Armour Hunter Mellowlink arranges lots of fighting around a simple, sturdy story, leavened with drama and mystery in just the right (minimal) amounts. I owe it a certain debt for being my introduction to the VOTOMS franchise. It has, therefore, always pained me that the only available subtitled version is a set of rips from some kind of well-worn VHS fansub. Recently, however, I discovered that some inspired /m/en had got together to release Armour Hunter Mellowlink in higher quality. It’s still the old, amusingly unreliable translation but — well, I did say this was mostly fighting, didn’t I?

Anyway, to celebrate, I thought I’d write another post about it.

In the absence of plot and characterisation, this show relies more than most on its landscapes to provide tone and colour to the action. Each of Mellowlink‘s episode titles announces that episode’s setting, which is what directed my attention in this direction in the first place. In fact, since the scenes of the show’s action are so conveniently listed, I might as well present my notes episode-by-episode — seriatim, if you will. This post is a sort of combined summary and commentary, or perhaps even in some sense a companion. There are some moderate spoilers, but I don’t think there’s anything that would ruin the story. 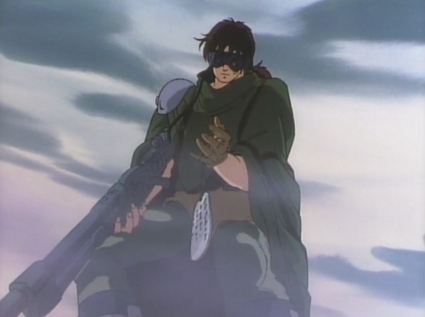 The first episode takes place in a ‘Wilderness‘ because it’s a stripped-down version of the revenge formula that the rest of the episodes will extend and play with: Mellowlink has to establish that there’s a badass with an oversized gun out for revenge, and landscape details would be a distraction. Mellowlink’s opponent pilots a very normal Scopedog, and Mellow kills him. There’s no need for complications to entertain the audience as we’re still just enjoying the dogtag-delivering, blood-smearing business in and of itself, not in its familiar, ritual role.

The second episode is set in and around a ‘Colisseum‘: Mellow takes on a former superior who’s forged a new career as a Battler. Their confrontation has an audience, some of whom gamble heavily on the outcome. Whenever there’s an audience in an action show I look at myself, but I suppose there’s a kind of barrier of muted, but widespread, dramatic irony separating us, the viewers, from them, the gamblers. They think it’s just a match, but we know why Mellow’s fighting. This is also the episode in which I first spotted design elements taken from Western films — specifically, the door of the bar that Mellow visits.

I’ve noticed Mellowlink and Chirico being compared to Rambo, and the third episode’s’Jungle‘probably — what’s a suitably pompous way to put this? — ‘partakes of the Rambesque’, perhaps. The Kummen arc of the original series alluded to past wars in Indochina, and this episode benefits from that, I think.  Snook, Mellow’s enemy in this episode, explicitly introduces a hunting metaphor to describe his favourite pastime: chasing the local jungle guerrillas down in a Scopedog, before celebrating with wine back at his mansion. I’ve mentioned Mellowlink‘s tendency to repeat certain elements from episode to episode, but there’s a repetitive structure within this episode too: one of the guerillas is using an Anti-AT rifle like Mellowlink’s and wearing a cloak like Mellowlink’s, and they both become trapped, at different times, in the same mud-pit. (I’m not entirely sure why.)

Mellow’s visit may have permanently altered this particular landscape: at the end of the episode, we see the guerrillas return to their rocket attacks on Snook’s mansion as our hero rides his motorcycle into the night. With Snook and his retainers gone I imagine the guerrillas, and with them perhaps the jungle, will reclaim his land. 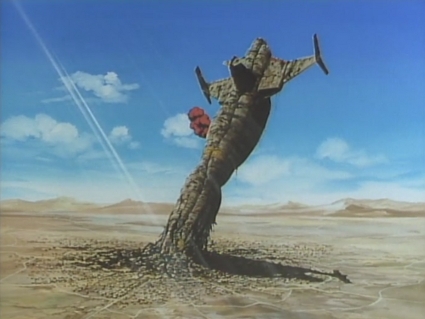 The ‘Leaning Tower‘ of the fifth episode is a crashed spaceship full of crazily-angled claustrophobic corridors, abandoned Scopedogs and other health hazards. The Astragius Galaxy generally has technology at about our level; the space ships and their faster-than-light travel are the main exception to this, and so they tend to get downplayed. In the original VOTOMS, the only spaceship that we spent several episodes in wasn’t under Chirico and Fyana’s control. Mellowlink‘s spaceship is a passive hulk filled with the traps of Mellowlink’s opponent — who is, for the first time, an NCO rather than a member of the officer class proper. In the preview for this episode (which is, I suppose, a kind of paratext) Carradine picks up Snook’s hunting metaphor from ‘Jungle’ and asks who’s the hunter in ‘Leaning Tower’;

‘Prison‘ is the literary theorists’ episode. Its attraction for all those Foucaultaku wielding copies of Discipline and Punish should be obvious, but the male-on-male violence, the threatened rape and the question of just who is penetrating whom mean are basically a big open goal for a certain type of gender theorist. Returning to more prosaic matters, the violence that Mellow’s fellow prisoners inflict on him keeps up Mellowlink‘s record for achieving unpleasantness without excessive gore (I’m thinking in particular of the fork-in-foot moment, and the accompanying sound effect). In fact, it feels like we’ve had a whistle-stop tour of the conventions of prison fiction by the end of the first half of the episode.

One of our subtitling benefactors said to me that the ‘Railway‘ bandits in the next episode remind him of Road Warrior. Looking at their motley collection of slightly punked-up, brightly-painted off-road vehicles, I can see why. Personally this episode always reminds me of the train battle in Around the World in 80 Days; this is, I am sure, entirely a product of my mind, and not an overt allusion, but both Road Warrior and the much earlier 80 Days feed off the idea of the Wild West. All this reminds me of my remark that the ATV franchise’s action elements feel very Hollywoodian. The train’s interior arrangement, meanwhile, begins to expand on the officer-class thing that Mellowlink has going on: Helmechion gets a lavishly-furnished armoured carriage; he, Lulucy and Carradine all use the dining car; ordinary citizens travel in nondescript seats; and Mellow hides in the cargo.

I don’t have much to say about the eighth episode’s ‘Ghost Town‘. This episode has an even simpler story than ‘Wilderness’, and very nearly as simple a setting: a giant hole in the ground, with lots of Polymer Ringer Liquid in the bottom. It is of course impossible to have an episode featuring PRL without blowing said PRL up, and this episode of Mellowlink feels like the prototype for one of the more memorably explosive episodes in the recent Pailsen Files. Ghost towns are also associated in my mind with the Wild West. I don’t think they’re common in cramped countries which lack the same kind of (ex-)frontier zones, like Japan or indeed the UK.

The ninth episode takes us to the ‘Forest‘ surrounding Lulucy/Fleurelle’s ancestral home, and briefly into the home itself. The fact that this is forest, not jungle as in the third episode, is important: we’ve entered a coniferous world of vaguely Teutonic aristocratic privilege. The castle’s full of gloomy, high-ceilinged rooms, and bare stone corridors with candelabra. Appropriately, the first third of the episode, in which we learn of Helmechion’s attempt to acquire Lulucy’s inheritance after murdering her father, is full of luxurious objects. There’s a pleasant sense of crescendo when Lulucy turns the ornamental items that she ought to own into tools, smashing Numerikov’s head into her mother’s dressing-table mirror with an ornate statuette. (No less significant a character than Annerose endorses the statuette as the high-born lady’s weapon of choice!) 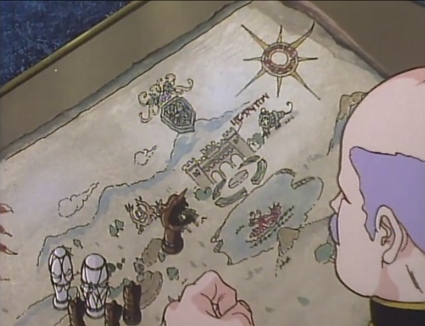 When Lulucy escapes into the titular forest (a traditional refuge for the dispossessed noble), she and Mellow outwit their captors using her knowledge of the landscape from her childhood, demonstrating the usual aristocratic claim to a connection with the land. At least there’s no moral superiority attached to those aristocratic roots in this story: Helmechion has the same familiarity with the landscape from hunting in his own youth, and once he has realised what Lulucy is doing he begins to use it to predict her movements, manipulating chess pieces on a stylised map of the grounds.

In the tenth episode the action moves inside the’Castle‘ itself. This is the final confrontation with Major Boil, the most sympathetic of Mellow’s enemies, and the episode stands in that long anime tradition in which men can only settle their differences by fighting until at least one, if not both, of them has been near-mortally wounded. Before the battle Mellow devotes his time to thoroughly booby-trapping the building. His conversion of the (presumably priceless) contents of Helmechion’s wine cellar into PRL Molotov cocktails is a particularly nice touch.

The vast, entirely metallic ‘Base‘ of the second-to-last episode is a return to the metal military surroundings of the initial Uoodo City arc in the original Armored Trooper VOTOMS. It didn’t strike me particularly in this episode, only really coming to the fore as a physical environment in the next one. The episode’s significant events take place in Helmechion’s office, where Helmechion gradually changes position, moving from behind his desk to sit on his settee and then to stand agitatedly in the middle of the room, before eventually lying dead on the floor.

I’m not sure whether gaming or theatre provides the best context for the final episode’s title, ‘Last Stage‘. Throughout the story, each episode’s eponymous environment has functioned like a level in a videogame, and reflecting on the the story as a game seems to fit its plot-light, violence-heavy approach. On the other hand, ‘Last Stage’ has Mellow fighting with the drama’s most mysterious actor. These are equally attractive explanations, and both of them emphasise the idea of location, so I think I’ll retain both. Looking at that episode listing again, I realise that all of the episodes are referred to as ‘stages’. 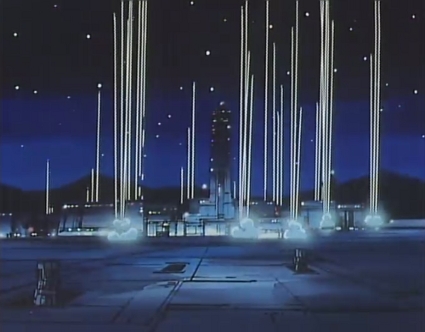 The Astragius Galaxy’s long-lasting war reignites just as Mellowlink‘s story comes to an end, and so we see the base launching vast waves of missiles, and suffering equally vast waves from space. Although the resulting destruction seems pretty absurd and pointless, it does intervene in Mellow’s favour a couple of times during the final showdown, which is fought out on the base’s roof, with surface-to-space missile launchers dwarfing the human combatants. These interventions seem to me to neatly tie into the opposition, set up in the final episode, between Mellow’s simplicity (or brute stupidity, depending on your point of view) and the involved plotting of the officer class, which ultimately undoes itself. It’s pretty clear which kind of thought the show prefers and, given its refusal to get bogged down in plot and characterisation, it certainly practices what it preaches.

10 responses to “Landscape With Anti-AT Rifle”