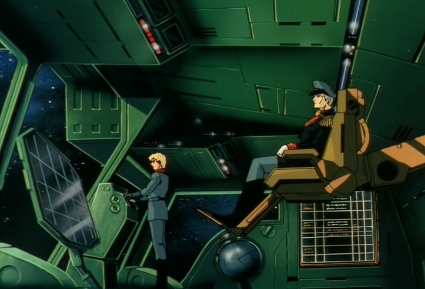 By chance it was December the first time I watched 0080, and in the years since I’ve made rewatching it part of Advent’s furniture. Moderate lateral spoilers follow.

This time around, I noticed the brief scene in which Killing instructs a subordinate (pictured) to attack Side 6 with nukes. I think this is the last of this dapper white-haired Zeon officer’s brief appearances in 0080. When he checks that Killing is serious a lowered head and what might be clenched teeth are the only signs that he’s uncomfortable. 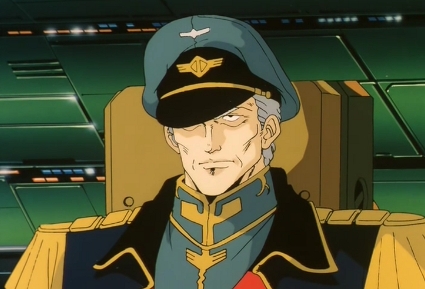 0080 provides a brief, purely verbal report of the battle which stopped his fleet. All we learn is that at least one Zeon ship was destroyed and at least two, including the one carrying the nuclear weapons (presumably this officer’s) surrendered. Maybe the only ships he had were the three shown when they’re loading the nukes, in which case that’s everything accounted for.

I can’t help wondering. Did he prosecute the battle to the limit of his abilities, or did he consciously or unconsciously pull his punches? Would a more fanatic officer have done a Crespo and refused to surrender? Did he perhaps lower his head and hide his eyes under his cap because he was already planning to disobey orders?

All rather irrelevant to 0080, yes, but entertaining as a parlour game.

(Relevant linkage to two of those who blog on tumbrel— sorry, tumblr: Pontifus, Coburn.)

This entry was posted in fanboy and tagged gundam, gundam 0080, twelve days of christmas 10. Bookmark the permalink.

6 responses to “VI: Losers With Nukes”