Is That Really You, Father Virgil?

Scanlators have been working on a manga adaption of the Divine Comedy (I seem to recall that Lelouch was a fan). However! Rather than simply translating the dialogue they’ve decided to admix it with appropriate lines from existing translations — not translations of the manga, but of the Comedy itself:

[W]hat we are doing with this as of now is 1. translating the manga, 2. comparing to the original divine comedy/history (when the mangaka leaves the context of the Divine Comedy), 3. mixing it all together and 4. re-writing it in a decasyllabic meter to match with the Divine Comedy’s poetry style. We used mostly H.F. Cary’s translation of the original Divine Comedy as reference, but if the translation was to archaic to be applicable, we used Longfellow’s.

While there’s obviously a lot of potential for a mismatch of tastes here — one person’s archaism is another’s ornament, and not all of us enjoy Longfellow — I instinctively approve of this. A translation is a new text, and so it’s perfectly permissible (though not always advisable) for a translator to throw accuracy out of the window and try something creative. END_OF_DOCUMENT_TOKEN_TO_BE_REPLACED

So I have an internet connection, of sorts, in my new home now. As suspected, acquiring it was, roughly speaking, as fun as nailing my own arm to a door, and not one of your nice clean, new doors, no, an old one with splinters and woodlice. Still, I’m back earlier than I expected, which is something.

Much of the time covered in this diary was taken up by the inevitable settling-in period before the beginning of the semester proper. (The mills of the academy may grind small, but they start grinding exceedingly slowly!) With little to do, I spent my time reading and watching anime – it was an idyllic, if slothful existence, marked by a sustained failure to watch any more Ideon. END_OF_DOCUMENT_TOKEN_TO_BE_REPLACED

Need The Warld Ken About My Ramblings?

I reacted positively when the idea of writing about Catcher on an anime blog was raised in certain quarters. It’s always easier to write about something if you have something else to compare it to, as you can dress up a simple list of points of similarities and difference and pretend that you’ve been thinking. Moreover, I like to compare seemingly unrelated things and – better still – lots of people have read The Catcher in the Rye. (The idea was/is essentially that people – anyone who wants to – could chip in, if they felt so inclined. Not that this is organised, or anything.)

END_OF_DOCUMENT_TOKEN_TO_BE_REPLACED

Tagged comparison, haiku, literature, notes, prosody, the catcher in the rye, welcome to the nhk 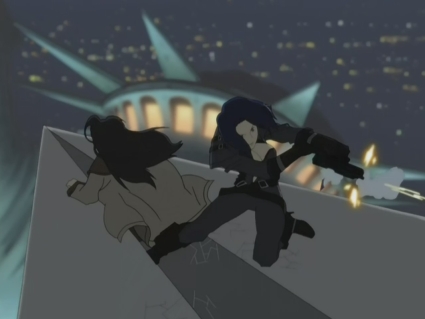 Flyin in ur otakusphere shooting at ur postz.

[L]iterature (as a medium in general) is more cogitative than other media and that its primary purpose is to instruct before it entertains (at least it is for the books I read). [. . .] I’d argue that this is proven by the fact that it is easier to stop reading The Sound and the Fury compared to watching an anime classic like Cowboy Bebop. I think it’s also easier to stop reading that novel compared to watching a film classic like The Godfather. All are representative classics of their own medi[a].

It’s silly of me to do so, since Michael includes his own qualification parenthetically as that first sentence came to a close, and especially since we agree on so much (I liked Lilim Kiss too). But some things are just inevitable; of late Owen hasn’t been regularly baiting us all, and I’m beginning to have withdrawal symptoms. It is delicious bait. I must eat it.

END_OF_DOCUMENT_TOKEN_TO_BE_REPLACED

I’ve used this before, but the internet needs more reverse trap Hamlet.

I have an unsubstantiated theory that any boys who encounter Hamlet during their adolescence will become slightly obsessed with the play. It is very easy to read Hamlet as a misanthropic, withdrawn and rather ’emo’ teenager, and – though this would seem very alien to the original audience, who lacked the concept – it’s no surprise that 21st century teenagers identify with him.

You can probably detect the voice of personal experience here, though I no longer identify with Hamlet in quite that way. For a start, although his age is much-disputed, there is textual evidence for a rather older Hamlet. And withdrawn teenagers are, for the most part, boring. But the obsession itself is harder to escape; to this day, productions of the play have me reaching for my wallet with the same irrational fervour that others use for figurines. (‘Ooh, look! A 1:8 Ophelia, “distracted, playing on a lute, and her hair down, singing“!’)

And so it is that we come to Self Made Hero’s ‘Manga Shakespeare’ version of Hamlet. It’s a strange (though hardly the strangest) concept. Curiosity drove me to buy it. But is it manga? Is it Hamlet? And what’s it actually like?

END_OF_DOCUMENT_TOKEN_TO_BE_REPLACED

Sounding Foreign in My Mouth

Mahou Shoujo Lyrical Nanoha A’s features a group of magical antagonists whose combat terminology is in German, although this is by no means the only foreign language used in the series (Bardiche and Raging Heart are noted for their English, while ‘Asura’ is a Sanskrit term and so forth). Quite what the status and connotations of the German language are in Japan I’ve no idea (though I’d like to find out) so I can’t guess what the intention of the staff behind Nanoha‘s German is.

END_OF_DOCUMENT_TOKEN_TO_BE_REPLACED

Eagle-eyed viewers of Code Geass R2‘s first episode may have spotted that Lelouch is reading Dante’s Divina Commedia while Rollo gives him a lift. (As a child, I never loved anyone enough to give them my last Rolo.)

END_OF_DOCUMENT_TOKEN_TO_BE_REPLACED

The White Devil eschews aimbots in favour of guts and friendship.

After finishing Nanoha A’s a few nights ago, I suppose I should put my thinking cap on again and examine my second dose of beamspam maho shojo goodness, attempting to produce something that bolts neatly onto the end of my previous remarks like an intellectual Dendrobium Orchis or the late application of glasses to a previously un-bespectacled girl. (Since this entry wanders a little, I felt ‘addenda’ was more appropriate than ‘addendum’.) Once again, I think I’ll write about Fate and once again I’ll use the excellent eleventh episode. (Spoilers follow the break.)

END_OF_DOCUMENT_TOKEN_TO_BE_REPLACED

This entry is dedicated to the memory of Sir Arthur C. Clarke.

Judging by the few episodes I’ve seen (how’s this for rushing to conclusions?) Legend of the Galactic Heroes is epic in scope and subject – and title: in its English rendering, ‘Legend’, ‘Galactic’ and ‘Heroes’ all convey the scale of the show. This isn’t the debased ‘epic’ bandied around on imageboards. This is the real deal. It may be the first time I’ve encountered an anime which has seemed truly Virgilian – I’d say Homeric, but I think in its awareness of war’s victims, its solemn stateliness and its focus on empire(s) the Legend is much closer to the Aeneid than the Iliad.