Analysis or thoughts about things which have finished

Spring 2013: The Shows that Matter

Valvrave has garnered lots of attention. I probably don’t need to describe it. I take it as further confirmation of my belief that the CE Gundam opening moves are now so familiar that they can be used as background.

So far Gargantia hasn’t been very good giant robot show, but I’ve been enjoying its fish-out-of-water plot. Mildly. Wouldn’t want to get too enthusiastic about something this forgettable.

An interesting one. It’s not very serious and absolutely has a parodic edge to it, but it’s also occasionally sombre. This probably won’t work for that many people, but I’m buying into it for now. Maybe it’s the surprisingly tentative opening song.

The present age being one of petty, diminished things, all three use CG for their giant robots. I find the work in Gargantia least satisfying. Valvrave and Majestic have the advantage of setting at least some of their fighting against the more anodyne background of space. And Majestic‘s robots are plasticky, commercialised objects within the show’s own fiction, too.

Really, the mecha show that matters most to me at present is Southern Cross. It’s fun and there’s no CG. And I like the Southern Cross Army’s body armour.

Studio Trigger have now put their delightfully-animated confection on YouTube with English subtitles. There really aren’t many reasons not to watch it, unless you’re allergic to little witches. Or to academia.

I imagine someone somewhere is accusing it of being just animation for animation’s sake, about nothing.

I’m not sure being that is a problem. But thankfully that’s not a discussion we need to have, ‘cos LWA does have a subject. It’s not necessarily clever or (if you ask me) interesting, but it is appropriate to the project: it bounces craft-as-entertainment and pragmatic craft and craft-for-craft’s sake off each other and then synthesises them.

‘Mantles and sabres are so passé nowadays’

And of course the fact that Space Pirate Captain Harlock was referenced is good: the “password” that Ririka trades with her old friend is the very first line of the Harlock OP song.

This is indeed good, and, as he goes on to say, it would be almost ungrateful not to acknowledge Harlock in a space pirate anime. What interests me is that this isn’t just thrown in the background somewhere: it’s being used as a passphrase. In a show more po-faced than Mouretsu, a passphrase would be something inocuous and definitely not related to piracy. But that show would be boring. In this show the phrase is a bold identification.

Taking the opening words of SPCH‘s opening—which is I think fairly obviously a creed from Harlock himself—as the phrase the pirates use to identify themselves to one another suggests that what makes an anime pirate piratical is that they are in some way Harlockian. Or, more narrowly restricting this to the phrase itself, that they have the Harlockian attitude to space: not a threatening final frontier, but a manageable ocean, and moreover my ocean, for my yacht. Taken this way I think it functions as a nice tribute, intentional or not.

(And was that first episode as a whole any good? Goodness, I don’t know. Ask someone else.)

In the Hands of a Giant God

The Be Invoked BD looks lush.

Mike on the Buff Clan:

Mike’s post is a very reasonable response to the first eighteen episodes. But I’d like to use it as a starting point, because it made me think: I’m not convinced that the show needs or wants us to sympathise with the Buff Clan. Instead, the verdict seems to be that we’re all bastards who deserve limited sympathy at best, and the only solution is to kill everyone.

That makes the famous kill-’em-all ending sensible. It’s not even especially sad, once you think about it: yes, we’ve had enough of these too-human humans. Wipe the slate clean. Give them a chance to start over. Maybe the ending of Space Runaway Ideon is just—compare Zeta Gundam, in which the finale’s distribution of deaths and vegetative states feels unjust for, after all, the AEUG are good guys. They aren’t guilty for resisting tyranny, as horrible as their war was.

That said I can spare a little fellow-feeling for the Buff Clan, despite rather than because of anything Ideon itself does. Unpleasant as the Clan are, their situation—trapped on a rollercoaster of military necessities which they helped start—is not unfamiliar.

Wolfgang in the Middle

(Legend of the Galactic Heroes spoilers.)

Wolfgang Mittermeyer seems middle-class. Upper-middle, but still middle, with his moderate house, and his normal marriage to his sweetheart. His closest friend within Reinhard’s comitatus, Reuenthal, is all Gothic aristocrat: heterochromia, candlelit mansions, Norio Wakamoto, the bizarre and unpleasant relationship with Elfriede.

END_OF_DOCUMENT_TOKEN_TO_BE_REPLACED

So I read a complaint that (in part):

ONLY Rygart can pilot [Delphine], [. . .] it’s a bit absurd to have a piece of military hardware be so closely associated with one person, particularly when that person is very untrained and the piece of hardware is better then anything else (IE a super prototype).

For me, these remarks crystalise that thing about the ‘elegant super-real reversal’. The quiet joke in Break Blade is that Rygart’s ride is a super prototype by virtue of being more real-robot than the supers that surround it, just as Rygart is special because he is (to us) more mundane. Rygart and Delphine are both ‘broken’, like that one character/weapon/build queue which never got playtested and like something which doesn’t work.

Sorry if you’d thought that up already. I liked it enough to post it.

END_OF_DOCUMENT_TOKEN_TO_BE_REPLACED

When Banagher threw up in the second episode of Unicorn, I thought it was natural. Marida just punched him in the belly, after all.

But that’s ridiculous. The Kshatriya, not Marida, punched the Unicorn, not Banagher, in the belly. He succumbs, I suppose, to the amount of force applied to the cockpit as a whole (and the NT-D’s demands?), rather than to any particular part of his body. And yet part of my mind still thinks these are human-scale bodies or suits of armour.

(Compare that scene in Votoms where Chirico’s wounded in the leg, and his blood, escaping from a bullet-hole, runs down his Scopedog’s leg. Though, re-reading what I just wrote, we could probably do other things with that.) 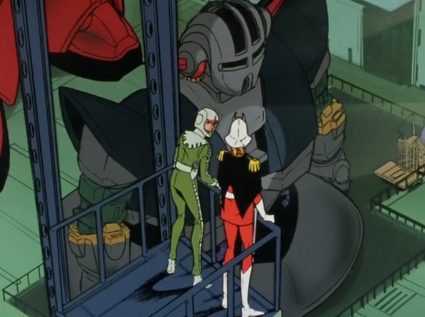 Maybe Kycilia told you that the Zeong is only eighty percent complete, says the mechanic, but it’s at one hundred percent of its operational capability. Legs? Legs are merely a matter of appearance, whatever the officers think.

END_OF_DOCUMENT_TOKEN_TO_BE_REPLACED

And They Say Gije is an Honourable Man

If you watch the eighth episode of Space Runaway Ideon, you will see Gije struggling to make combat honour work. If you ask me, his increasingly wild rules-lawyering provides much of the episode’s pleasure. ‘Okay, I had to take children hostage to make you duel honourably with me, but they’re being held hostage by my assistant, and the warrior code doesn’t apply to him as he’s a commoner, now can we get on with it please’.