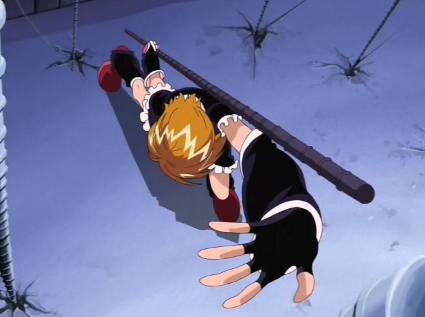 The original Pretty Cure is simple and repetitive in ways that even its successors aren’t. Years ago I argued that this kind of austerity might have its uses. I wouldn’t put it in those terms, now, because I’m too conscious of my ignorance and too scared of that kind of exegesis, now, but I still think along the same lines.

Apart from the stock-footage finishers combat is almost entirely physical, and the finishers themselves are pretty simple compared to successor titles. The cast is small and there are only two Cures. Even the Cures’ names are telling: other iterations give us thematic sets—Melody-Rhythm-Beat-Muse—but here we just have Cure Black and Cure White. That’s not random, but it’s pretty, well, you-know-what. (True, later on there’s Shiny Luminous, but she doesn’t count.) Meanwhile many of the players in the overarching plot are named in a wonderfully lazy way, so the villain is a couple of shades away from being called The Villain, for example, and he manifests as a dark humanoid… shape. Indeed, I’m going to risk saying that the overarching plot is tokenistic and that that’s not a bad thing. If I’m watching for my daily dose of Cure Black punching evil in the face, I’d much rather the story be a quiet background joke.

So, as something approaching a limit case, Pretty Cure reminded me that sometimes unshakeable courage and the occasional handy rebar are more important than narrative.

I: ‘What it is like to have spent sixteen hours of your life watching one cartoon for little girls’

I may have humourous qualms about the format, but it’d be a shame to let the tradition lapse.

END_OF_DOCUMENT_TOKEN_TO_BE_REPLACED 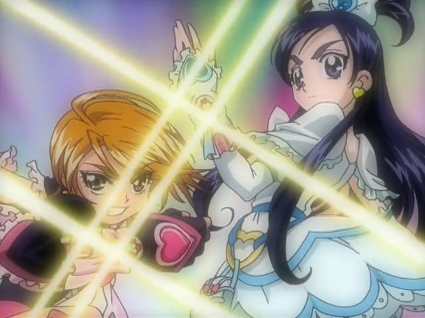 END_OF_DOCUMENT_TOKEN_TO_BE_REPLACED

I’m a little tired of this angle.

END_OF_DOCUMENT_TOKEN_TO_BE_REPLACED

Tagged genre, i may be wrong, magical girls, sniping