XI: The People in That Thing Are Insane

I wasn’t planning to mention this, as I don’t have the energy to do it justice. But I also don’t have many other ideas, so here we are. 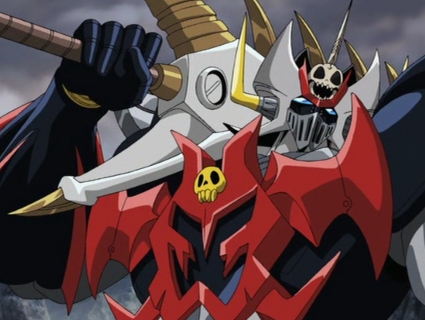 I got my hands on Mazinkaiser SKL‘s first episode on the evening of December 31st, so it makes it into 2010 by a whisker. Readers are invited to imagine any of my standard enthusiastic responses to giant robots fighting after this here colon: burble SKULL burble explosions burble. The amount of actual and implicit violence against women distressed a small thinking-section somewhere in my head, but the other sections argued it down—’It’s not normal,’ they said, ‘to simultaneously have scruples and an anime blog’.

If you want to read more, Crusader wrote a solid reaction, Ghostlightning tried to pin down SKL‘s essential puerility and psgels was unimpressed. EDIT: Dave weighs in with a SKL-as-1998-Manga-Video-property take.

X: Life in the Old Scopedog

I heard a lot about Votoms in 2010. Shining Heresy, the defrosted-Chirico-vs-Space-Catholics OVA, was (finally) translated, and there was a sudden flood of new material produced or announced: Alone Again, Phantom Arc, Case;Irvine and Votoms Finder.

I’m cautiously optimistic about this. The CGI action in Pailsen Files was tolerable more often than it was great, and one wonders how much more interest can be wrung from the life story of Chirico Cuvie. But Case;Irvine and Votoms Finder aren’t about Chirico (from what I can gather, Takahashi isn’t even involved in them). This could make for some interesting uses of the Astragius Galaxy, which is a very nice real robot setting. Okay, it probably won’t, but it could, right?

Also it’s sort of heartening that someone, somewhere, reckons money can still be made out of this franchise.

I watched the last episode of Victory Gundam this August, about two-and-a-half years after I watched the first episode. I thought it was a fairly bad mess with salvageable, enjoyable facets. I stalled about half of the way through, which is fairly common with lugubrious fifty-episode-plus Tomino anime, but I also stalled for a long time before watching just the final episode itself. Because now that I’ve watched it, I’ve more or less caught up with the production of Gundam.

Well, that’s a lie. There’s still the 00 movie, which I probably won’t enjoy, and three-fifths of Wing, plus Endless Waltz, the one part of the franchise which I find entirely unwatchable. Beyond that there’re a few oddities like Mission to the Rise which I can’t be bothered to watch, and of course a substantial amount of manga, games, prose &c. But still, finishing Victory created a sudden absence: I no longer have the ‘see more of whichever Gundam I’m working through’ option when I’m bored. 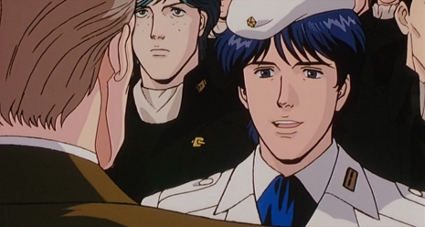 I watched Overture to a New War last January. I’m not sure if it was freshly translated back then, or if I just happened to choose that time to watch it. It’s a filled-out and more coherent replacement for the first two episodes of Legend of the Galactic Heroes.

While reviewing some of the Alliance’s officers, Truniht poses Yang a simple question: what is the strategy for certain victory? And Yang says to assemble six times the enemy’s numbers, supply the troops perfectly and ensure the commander’s orders are transmitted without error.

The Legend doesn’t do jokes, or rather doesn’t do funny jokes, but it can be wry when it wants to.

As Dai-Guard nears its conclusion, Tokyo is evacuated. The streets are completely empty.

But of course we must still stop at red lights.

By chance it was December the first time I watched 0080, and in the years since I’ve made rewatching it part of Advent’s furniture. Moderate lateral spoilers follow. END_OF_DOCUMENT_TOKEN_TO_BE_REPLACED 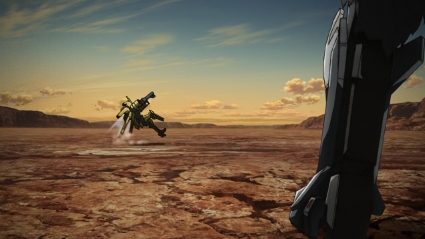 In the second part of Break Blade, a running golem has its leg shot out. So great is its momentum that after initially sliding face-first into the ground, it enters a catastrophic bouncing roll making, by my count, five distinct contacts with the ground. (I found the ground itself unconvincing when I looked hard at it, but I suppose savings had to be made somewhere. Or else my amateurish sense for animation’s off, as usual.) Quite a departure for a robot which had performed so efficiently up to that point, but then we have a foot in the shot reminding us whose mecha is the really cool one.

Break (or Broken, maybe) Blade as a whole is a strange thing. Outside of the finely-detailed robot-on-robot violence, and the elegant super-real reversal built into the manga’s premise, it all feels a bit plodding to me. So it’s good that these guys can make a golem falling over look impressively nasty.

In a quick read of the Mazinger Z manga this summer, I recognised the attitude that lies behind some of the good stuff which fills out Mazinkaiser and Shin Mazinger Z. How will SKL turn out, I wonder?

(I shamefully cropped and resized the image above from an eye-popping three-page sequence.) 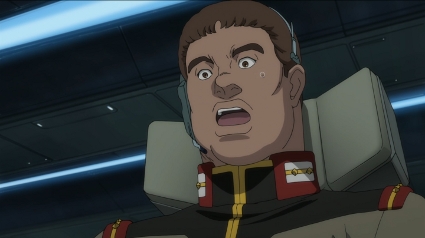 ‘Technology takes precedence over characterization, and thematically, the material is retrograde.’

II: It Has Missiles and a Stealth Mode, Too 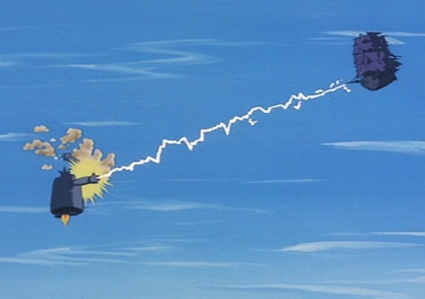 Bowsprit laser? Yes! You are the most heavily-armed flying phantom ship ever!

(Competitor moments: all the parts where I was mentally bouncing the film’s plot off of its circumstances of  funding and production. Read more about The Flying Phantom Ship here.)