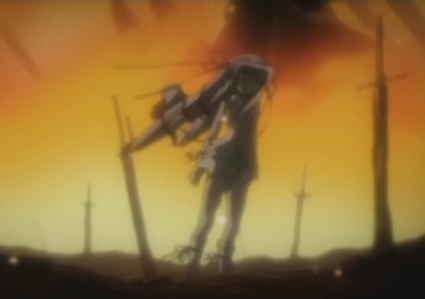 To add moral disapproval to the marks against it, Demonbane contains a certain amount of fanservice involving women of varying ages and proportions. The writers retained enough decency to put the beach and the onsen in the same episode, but I can’t help thinking that said episode’s bout of serendipitous-hypnotic-gas-induced-lolita-pseudo-rape could have been cut in favour of something which would have helped to clarify the plot. I’m assuming this was in the original game, for it was entirely gratuitous. I would’ve settled for a badly animated CG dragon, but perhaps the budget for bad CGI was devoted to the mecha.

[Before I’m accused of being part of the ‘plot is more important than fanservice’ camp (studied here), allow me to point out that (objectionable as fanservice is) the two can be integrated quite well. Take the fourth episode of Mazinkaiser: the fanservice becomes more graphic as the main movement of the episode’s plot comes to its climax, and breasts are the key problem-solving element in the story.]

I don’t know why but I have a harder time accepting CGI than most. Macross Frontier‘s action sequences provoke near-universal salivation; I think they’re brilliantly choreographed, but the CG animation strikes me as merely passable, and it’s among the best I’ve seen. In fact, I’ve only ever been really convinced by obviously computer-generated work for short parts of one OVA, Battle Fairy Yukikaze (which, strangely, is not mahou shoujo). Even a less picky (or more normal) viewer would, however, balk at the animation of Demonbane‘s eponymous mecha, and some of the more throwaway opponents are downright poorly done: there’s no shoddy dragon, but there is a shoddy Dagon. 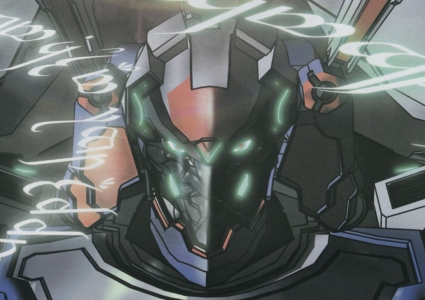 It’s a shame, because Demonbane itself is not a bad design. Rather than being cool simply by pleasing the eye, or being cool by looking gritty (like a Scopedog), Demonbane looks cool because it’s confusing. It’s body is odd, with giant shin-guards, a wasp-waist and massive shoulders, and it very clearly feels magical (only magic could justify such bizarre weight distribution). At the same time it feels just technological and robotic enough to be not entirely mystical. This impression is underlined by its frequent maintenance sessions, and the way that some of its attacks mimic moments of extremely unrealistic mecha science (the Lemuria Impact, combining an approval sequence and something suspiciously like a Shining Finger, is a prime example).

This uneasy combination of robotic and magical brings us to Demonbane‘s most distinctive feature, it’s appropriation of elements from the Cthulhu Mythos. Until a few weeks ago my knowledge of Lovecraft extended only as far as dimly-remembered parodic elements from Discworld Noir, but Kaiserpingvin drew a connection between Lovecraft and the Alhazerd Precia Testarossa was seeking in Magical Girl Lyrical Nanoha, sending me off to do a little reading.

Lovecraft’s monsters are apparently horrifying not because they’re evil, but because they’re incomprehensible, amoral things: their existence drives home our insignificance and the limits on our ability to comprehend the universe (Lovecraft’s term for his work’s ethos was ‘cosmicism‘). He also seems to have spawned the literary equivalent of a RPG campaign setting (and a real RPG – one which quantitatively tracks sanity!), encouraging other writers in his circle of acquaintances to borrow names and concepts from his work. This continued after his death, with various authors busily referencing away.

Of particular note among these inheritors is August Derleth, who edited and promoted Lovecraft. Derleth’s own additions, alterations and categorisations created a dualistic system, a titanic (if still eldritch) clash between two sides. Categorisation probably suited Derleth, a Catholic, and it’s continued with the influence of the aforementioned Call of Cthulhu RPG: it would presumably be boring if dice-rolling combat wasn’t involved, and it’s hard to have dice-rolling combat when your opponent cannot be comprehended by the puny faculties of the human mind.

Dualism also evidently suited Nitroplus when the story for Demonbane was written. The show borrows from Lovecraft quite widely – there’s a blizzard of grimiores to get your head around, Demonbane wields an arsenal of artefacts, the whole show is set in Arkham, the beach episode happens at Innsmouth, Nyarlathotep is cunning and manipulative, &c – but the borrowing is superficial because it doesn’t affect the underlying moral structure.

Demonbane is more Derleth than Lovecraft: it’s a story of good and evil and the antagonists are comprehensible. The hero’s battles have clearly-defined rules and are always fought with the hope of victory, leaving aside the point – my favourite point – about two thirds of the way through when matters briefly become futile and desperate. I suspect this was a conscious decision, because Nitroplus have written some games which are, frankly, messed-up: try Wikipedia’s summary of Saya no Uta for size!

If there was a mecha show which was truly Lovecraftian, it wouldn’t be much like this one. It would chart the struggle of an alcoholic hero to merely survive, rather than protect anyone. It would revel in the horrific, the unspeakable and the incomprehensible, rather than in cool special attacks. It would be punctuated by terrifying, chaotic battles with cultists in semi-biological mecha (designed by Escher, Giger and Bosch in committee, while on LSD), and the final, desperate conflict would leave the hero physically alive but comprehensively insane. In fact, it would be something like a mashup of Zeta Gundam and Evangelion.

Returning to Nanoha for a moment, Precia Testarossa’s attempt to reach Alhazred is arguably more Lovecraftian than Demonbane‘s entire plot, for she descends through a rift into an unknown place which has no normal rules, and disappears. Demonbane‘s hero travels somewhere where, we’re told, ‘human logic and the laws of this universe no longer apply’, but what happens there is standard mecha stuff, and our hero returns. Of course, while Nanoha‘s void may be truer to Lovecraft, it is only the smallest of elements: Nanoha‘s story clearly has a good and a bad side, and also has comprehensible antagonists (Figure 17‘s inscrutable Maguar are much more Lovecraftian opponents, though they still obey discernable rules).

All of this is not, however, a problem for Demonbane (which has enough problems of its own), it’s an observation. We’re used to stories with clearly identifiable sides and happy endings, and Demonbane isn’t a great literary project or an attempt to troll future generations of academics, it’s the animated adaption of a visual novel. Plus, of course, you have to admire a story with the audacity to transform the Necronomicon (at the name of which one is meant to shudder) into a pink-haired tsundere in a gothic lolita dress.

13 responses to “Demonbane, Nanoha and the Cosmic Horrors”