Sounding Foreign in My Mouth

Mahou Shoujo Lyrical Nanoha A’s features a group of magical antagonists whose combat terminology is in German, although this is by no means the only foreign language used in the series (Bardiche and Raging Heart are noted for their English, while ‘Asura’ is a Sanskrit term and so forth). Quite what the status and connotations of the German language are in Japan I’ve no idea (though I’d like to find out) so I can’t guess what the intention of the staff behind Nanoha‘s German is.

For my part though, as the viewer rather than a creator, mixing magic and German brings to mind Goethe’s Faust and also the eerie casting scene in Der Freischütz. Not unhelpful associations, though it’s a little disorientating to be watching a magical girl throw bullets and thinking of Kaspar and Max. Unfortunately, because I actually understand a fair number of German words, sometimes the effect isn’t as impressive. When Vita shouts ‘pferd(e)’ I chuckle, because I can’t help but think of Karura:

HORSE: A type of Pleasure involving horses, HORSE is considered both desirable and acceptable. Brown and bay horses are most commonly used.

This HORSE experience illustrates the difficulty of encountering, in anime, non-Japanese words from a language that you yourself comprehend.

Allow me to pause, and recommend Avatar’s account of subtitling A’s. It’s interesting to read how all this works at the coalface, so to speak, and Avatar highlights how many minds the script has to pass through before it reaches the subtitle viewer:

I know practically no German whatsoever, of course . . . but that’s almost certainly the case for the translator as well, especially if they’re working from a script with the German poorly converted into romaji (and listening to it being read by VAs who don’t know German either, and even that is assuming that the Japanese writer didn’t blow it in the first place, which happens a lot too.)

In a glass darkly, or what?

Anyway, foreign words sound cool and a bit mysterious. You can see this in English: I’ll stick with Faust and use Kit Marlowe’s English Doctor Faustus as an example. Marlowe gives the bad Doctor a long summoning incantation in Latin which would sound much more pompous and stupid if Faustus just reeled it off in English. Latin, with its antique literary and religious associations, supplies a mystique which English doesn’t have (to an English-speaker).¹ The same thing’s going on when ‘Wandering Swordsman: Recollection’ becomes Samurai X: Trust & Betrayal. (And why not? Samurai sell better to English-speakers than mere swordsmen.)

The other effect that foreign words have relies not on mysteriousness but on comprehension: ‘Ah, I see what they did there!’ A simple and classic example from English-language media is the name of the hero in The Matrix. ‘Neo’ is ‘new’ in Greek, and it’s also an anagram of ‘one’. ‘Ah, I see what they did there!’ say the fans, deriving some pleasure from the thought that some people won’t have seen was done there. Or they look it up later and derive some pleasure from the thought that, even if they didn’t get it at the time, they can at least use Wikipedia.

This is, in fact, a form of intellectual fanservice. It can be played on many levels, depending on the complexity and obscurity of the foreign words used. The Servants in Fate/stay night are a fine example of fanservice for mythology buffs. Neon Genesis Evangelion‘s opening sequence is, like the segmented structure of Foucault’s Pendulum, an exercise in fanservice for fans of Kabbalah. Kyon’s nickname is fanservice for fans of the Cynics. ‘Vader’ means ‘father’ in Dutch. And so forth. 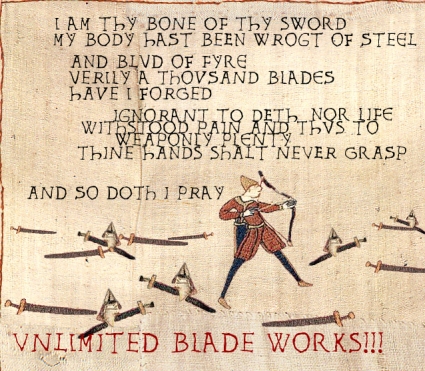 This can be a complicated and confusing business for a native English-speaker. Sometimes, something which might sound utterly badass in Japan comes across as silly-sounding. For all I know, sometimes the opposite happens. Sometimes these things can pass through silliness into badass territory on the other side: ‘I am the bone of my sword’. And sometimes, as in the case of My Otome‘s ‘Garderobe’ Academy, one doesn’t know what to think: Cupboard? Toilet? ‘Guard-Robe’ (which is not unlike the word’s origin anyway)?

Yet – perhaps because of these confusions – I like the use of foreign languages in my anime. By turns the use of foreign tongues makes me feel cosmopolitan, massages my ego, amuses me, and sends me Wiki’ing furiously. Now and then – as with the collision between Vita and Der Freischütz – it actually does something unexpected, brilliant and probably unintended on the scriptwriter’s part, and these moments of ‘*clasm’ (‘Linguaclasm’? ‘Glossaclasm’?) are one of the things I watch anime for.

In fact, I’m beginning to enjoy it more when English is misused in anime than when it’s used correctly. This is probably because I love wordplay so much, but – to take Code Geass as the almost-inevitable example – I like the way Britannian Knightmares have a loading screen which says ‘we shall be the shields which defend our momeland’. Why use ‘motherland’ or ‘homeland’ when you can have both? Similarly, the eyecatch says ‘Lelouch of the Revellion’. It’s almost certainly a mistake, but, as an accidental combination of ‘revolution’ and ‘rebellion’, it reflects the Black Knights’ uncertain status (a ‘revolution’ is more egalitarian, at least nominally), and it also reminds me how much I revel in the show as a whole. Strangely, the standard of Geass‘s English can be quite high.

Linguists divide languages into family trees, and I’ve heard English described as the world’s ‘rape child’. It’s an odd yet accurate metaphor. The precedent for all this was set by the Normans, whose conquest of England has certain superficial parallels with the fate of Area 11 (the arrival of new, more mobile warriors in the form of mounted knights, for example). It’s thanks to the period that followed that English-speakers usually have at least two ways to say what they mean, one with words derived from Old English and one with words derived from Anglo-Norman. And because I like the idea of new words, I’m broadly in favour of the Japanese – or anyone else – (ab)using English, however disrespectfully it’s done. 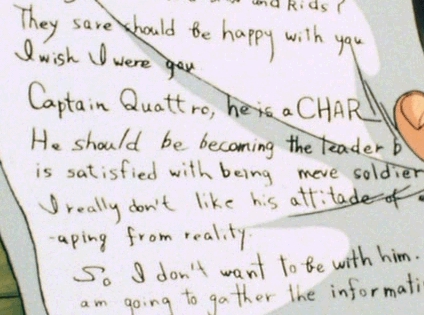 I was discussing this recently with a friend who enjoys josei manga. He pointed me to the discussion page for josei’s Wikipedia entry. One Wikipedian suggests that ‘josei’ may have been appropriated by English-speaking fans, and proposes renaming the article, and then a Japanese user chimes in:

Now I normally try to avoid reading the politicking of Wikipedians, and I’ve no idea whether they’re actually right, but I’ve noticed that fans outside Japan are frequently more comfortable with an adopted Japanese words. A little digging around reveals that a lot of our loanwords (like ‘hentai’) have been wrenched from their contemporary Japanese meaning – not that this means we should be trying to preserve ‘original’ meanings. I suppose I’m just newly aware of the importance of the mouth saying the words to the words’ meaning. (Not unlike the difference between ‘yaoi’ seen on a book and ‘yaoi’ seen on a paddle.)

Maybe the use of foreign languages is an exercise in остранение (now I’m doing it too), defamiliarisation – and here we come back to the first use for foreign words. Flip the girl upside down, silhouette her and throw some English in (‘she found herself on an island’ might be a good start) and you’ve created something considerably more interesting than just a picture of a pretty person and a comment next to it. I don’t want to sound too cynical about that, because that’s how these things are done.

I recall seeing an Othello set emblazoned with the slogan ‘The mysterious game from the East’. Although Othello was formulated in Japan, I’d hardly call it ‘mysterious’ – but of course if it’s ‘from the East’ then it must be mysterious in some way.

1. A mystique which is subverted at the close of the play when Faustus uses a terribly inappropriate quotation from Ovid, ‘Oh, run slowly, slowly, HORSEs of the night’ (‘O, lente, lente currite, noctis equi‘). Faustus is terrified because devils are coming to claim his soul but he quotes a lover wishing the night would pass slowly so that he can spend it in his mistress’s arms. This is probably a joke Marlowe threw in for the well-educated members of his audience (see the second reason I propose for using foreign words) as well as a subtle touch to remind us how sin-bound Faustus has become. (Marlowe, unlike Goethe, chose to give the story a BAD END. Very BAD indeed.)

UPDATE: Author comments on остранение and the dangers of o’er-broad terms (two subjects not unrelated).

20 responses to “Sounding Foreign in My Mouth”